Following the meeting, Al-Makari said: “We were honored today to visit the Diman, this region that is dear to us, and we discussed the latest developments particularly what happened yesterday in the banks. There is certainly a fear that this would spread to everything, and it is so unfortunate to be reflecting this bleak image…”

He affirmed that speeding -up the election of a president of the republic was at the top of their discussion during the visit, stressing that the Patriarch advocates the quick election of a new president within the constitutional deadlines. “We share his opinion and viewpoints, hoping that a president will be elected as soon as possible,” he added.

The Information Minister believed that “the problem does not stop at holding a session to elect a president, but rather with the constitutional political game that allows for the disruption of the quorum by some parties.”

He added: “If this obstruction continues, that means there will be no election of a president and the issue may be prolonged, and therefore the time that passes amidst the vacuum, God forbid, will be fatal for Lebanon. Therefore, we appeal to all parties and parliamentary blocs, especially the blocs that were criticizing those that were boycotting the sessions, not to make the same fatal mistake.”

Regarding his opinion of what happened during the budget discussion session, Al-Makari said: “Unfortunately, it was something expected, but it is pathetic that we were discussing the 2022 budget while we are at the gates of the year 2023. From here, we appeal to officials not to procrastinate because every day that passes without progress is fatal for Lebanon.” 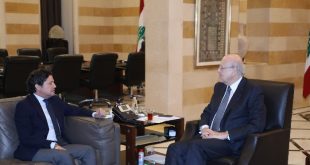