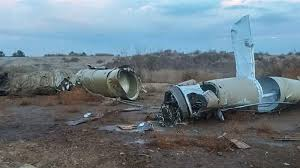 At least four Iraqi soldiers were wounded after rockets struck the Balad airbase north of Baghdad housing US forces, according to Reuters.

The bombs all fell on a runway within the base, the outlet reported, citing two unidentified military sources. There were no immediate reports of casualties.

The Iraqi military acknowledged the attack in a statement shortly after reports of explosions near the base surfaced online, saying eight rockets landed on the Balad airbase.
At least four Iraqi personnel were injured in the attack, the statement said, including two officers.
It was not immediately clear how many US and coalition troops were being housed on the base at the time of the attack. The strike on the Balad airbase followed an attack on two other bases housing US and coalition troops carried out by Iran earlier this month

However, there was no immediate indication the latest rockets attack was linked to Tehran.

The region has found itself at the epicentre of an increasing conflict between Iran and the US after Donald Trump ordered the killing of General Qassem Soleimani, the head of the Islamic Revolutionary Guard’s elite Quds Force, during a 2 January air strike at Baghdad’s international airport.

Tehran then struck two bases in Iraq housing US and coalition troops, though no casualties were reported at the time.

The US Department of Defence said Soleimani “was actively developing plans to attack American diplomats and service members in Iraq and throughout the region” and had approved an attack earlier in the month against the US Embassy in Baghdad.

Iranian officials have said the recent air strikes against Iraqi bases housing US troops were not meant to escalate the conflict into a full-scale war.

Still, Iran’s Supreme Leader Ayatollah Ali Khamenei has said a “harsh retaliation is waiting” for the US after killing Soleimani, who has been described as the “architect” of Tehran’s proxy wars across the Middle East.