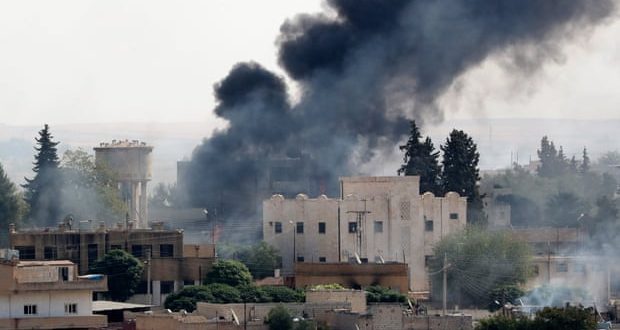 Kurds reach deal with Damascus in face of Turkish offensive

Kurdish-led forces in control of north-east Syria have reached a deal with the Assad regime to stave off a bloody five-day-old Turkish assault, as more than 700 people with links to Islamic State have escaped from a detention camp in the area.

Kurdish fighters controlling the region would surrender the border towns of Manbij and Kobane to Damascus in a deal brokered by Russia, officials said on Sunday night.

Syrian state media said units from President Bashar al-Assad’s army were moving north to “confront Turkish aggression on Syrian territory”. Unconfirmed reports said the deal between the Kurds and the regime would be extended to apply to the whole of north-east Syria.

“After everything, it seems that the fate of the Kurdish people [is to be abandoned]. We did everything that we could, we called upon the international community … but it did not result in a solution.

We urged all Kurdish [groups] to show solidarity, but no one listened,” Ismat Sheikh Hassan, the leader of the military council in Kobane, told local television.

The deal is likely to be a bitter end to five years of semi-autonomy for Kurdish groups in north-east Syria, forced by Ankara’s offensive on the area. Turkey’s Operation Peace Spring started on Wednesday after Donald Trump’s announcement that US forces would withdraw from the region.

Trump had not specified a timeframe for the US withdrawal from Syria, but on Sunday US defence secretary Mark Esper said the remaining 1,000 special forces in the country had been ordered to leave “as safely and quickly as possible” as the fighting between Turkey and the SDF began to threaten US military positions.

The area’s Kurdish-led fighters, the Syrian Democratic Forces (SDF), have been funded and trained by the US to combat Isis since 2015, finally defeating the militant group in March after losing 11,000 troops in the battle.

Turkey, however, says the largest unit of the SDF, the Kurdish YPG, is a terrorist group indistinguishable from the Kurdistan Workers’ party (PKK), which has fought an insurgency against the Turkish state for decades.

Trump’s decision to abandon the SDF to an inevitable Turkish assault has been widely criticised even by his staunchest allies as a betrayal of a US military partner which has unleashed to a humanitarian disaster and threatens to sow the seeds of Isis’ resurgence amid the chaos.

On Sunday, at least 750 people with suspected links to the militant group reportedly fled a displacement camp in north-east Syria.

France voiced its concern at the report. Government spokeswoman Sibeth Ndiaye told France 3 television: “I do not know, today, who exactly the people are who fled from the camp; it has been a worry for France since the beginning of this armed intervention.”

France has been hit by a wave of jihadist attacks since 2015, many claimed or inspired by Isis, and has expressed concerns that a Turkish assault would bolster the group.

On Monday, the French presidency said in a statement it was taking measures to protect its personnel inside Syria. “Measures will be taken in the coming hours to ensure the safety of French military and civilian personnel present in the zone as part of the international coalition fighting Islamic State and humanitarian action,” the statement said.

The women and children formerly part of the “caliphate” had been held in a secure annexe at the Ain Issa camp. They began to riot and scared away the guards after Turkish shelling struck close to the area on Sunday, said Abdulkader Mwahed, the joint president for humanitarian affairs in the Kurdish-held part of Syria.

The UK-based monitor the Syrian Observatory for Human Rights put the number to have escaped at 100, publishing pictures of men, women in black niqabs and small children running through yellow scrubland.

The camp was home to a total of about 13,000 people, including three suspected British orphans and a British recruiter for Isis, Tooba Gondal.

Turkish president Recep Tayyip Erdoğan’s stated goal is to create a 20-mile-deep “safe zone” on its border with the SDF, enough to keep Turkish border towns out of the range of shelling and rocket fire.

However, Ain Issa and other Kurdish-held roads and towns south of the proposed safe zone have been hit by airstrikes and shelling. Syrian rebel proxies fighting on behalf of Turkey were pushing south and refused to allow the town of Manbij to fall into regime hands, a fighter with the Syrian National Army (SNA) rebel umbrella group said, reporting that Turkey had begun shelling the SDF-held town west of the Euphrates.

A convoy of 40 armoured Turkish trucks travelled into Syria from the Jarablus border crossing to reinforce the Turkish offensive, another military source said.

Speaking on Sunday, Erdoğan rejected offers for mediation with the SDF and criticised his western Nato allies for standing by what Turkey considers to be a terrorist organisation.

He also dismissed the reports of escaped Isis prisoners as “disinformation” aimed at provoking the US and other western countries.

About 130,000 people have been displaced in Syria in the five-day-old operation so far, with at least 60 civilian casualties in Syria and 18 dead in Turkey after counterattack SDF shelling of Turkish border towns.

The SNA summarily executed nine civilians including a female politician, a human rights monitor has claimed. The umbrella group said it had ordered an investigation and commanders were to “continuously supervise combatants on the frontlines to prevent any abuse”.