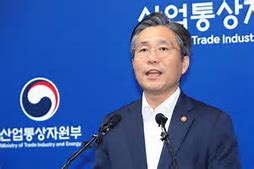 The curbs were seen as a response to a South Korean court ruling last year ordering a Japanese company to compensate South Koreans who were forced into labor during World War II.

Japanese officials have cited “inadequate management” of sensitive items exported to South Korea as a reason behind the curbs, as well as lack of information sharing on export controls.

Adding to tensions, Japan’s NHK and FNN broadcasters reported that hydrogen fluoride, one of the three materials covered by the curbs that can also be used in chemical weapons, had been shipped to North Korea after being exported to the South.

South Korea has said the reports were groundless and it has been doing a better job than Japan in keeping track of illicit exports.

North Korea was slapped with sanctions for its missile and nuclear weapons programs which it pursued for years in defiance of U.S. Security Council resolutions.

“It is a grave challenge to our government which has not only been faithfully complying with the global export control and sanctions regime but also making utmost effort to develop inter-Korean ties and peace within the sanctions framework,” Moon said.

The two countries held five-hour marathon talks in Tokyo on Friday but the feud only deepened, with both sides presenting conflicting accounts of each other’s demands.

There are concerns that the row could threaten global supplies of microchips and smartphone displays, while undercutting crucial collaboration on fending off North Korea’s nuclear and missile programs.

Moon called for Tokyo to end the “consumptive” dispute by jointly receiving a probe from an international organization and to withdraw the curbs via dialogue.

“I warn that the measure will ultimately inflict greater damage on the Japanese economy, as our companies break away from their reliance on Japanese materials, parts and equipment, diversify their import sources and localize the products,” he said.

Seoul has called the export curbs “retaliatory” and referred it to the World Trade Organization. Japanese officials have declined to comment directly on the media reports about suspected exports to North Korea.

Relations between Washington’s two Asian allies have long been plagued by memories of Japan’s 1910-45 colonization of the peninsula and the war, including the matter of “comfort women”, a euphemism for girls and women forced to work in Japanese wartime military brothels.

Japan says the issue of forced labor was settled by the 1965 treaty.