Home / Last News / Macron bows to protesters’ demands and says: I know I have hurt some of you 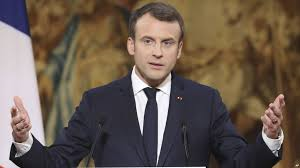 Macron bows to protesters’ demands and says: I know I have hurt some of you

Emmanuel Macron has bowed to pressure from the street to announce a catalogue of emergency measures aimed at pacifying the gilets jaunes after weeks of civil unrest in France.
In a long-awaited address on primetime television, the president tried to talk the protesters out of further action, promising a rise in the minimum wage and tax concessions.
In a mea culpa, Macron said he had heard and understood protesters’ anger and indignation, which he said was “deep and in many ways legitimate”.
He admitted he had not been able to provide solutions quickly enough since his election. “I may have given you the impression that this was not my concern, that I had other priorities. I take my share of responsibility. I know I have hurt some of you with my words,” he said.
The president began his pre-recorded 13-minute declaration saying the past few weeks of protests had “profoundly troubled the nation”, and that legitimate demands had led to “a series unacceptable violence”.
He said the anger went back 40 years, but he added: “No anger justifies attacking a police officer, a gendarme, or damaging a shop or public building. When violence is unleashed, freedom ends.”
Macron, elected on a centrist reforming programme 18 months ago, said he understood the anger and “distress” of those struggling to make ends meet at the end of the month who felt ignored and economically squeezed: “It is as if they have been forgotten, erased. This is 40 years of malaise that has risen to the surface. It goes back a long way, but it is here now.”
To help struggling workers, he said the government had been ordered to introduce “concrete measures” from 1 January, including increasing the minimum wage by €100 (£90) a month. Overtime would be exempt from tax and social charges, and a planned tax on pensions under €2,000 a month would be cancelled. All employers “who can” were asked to give workers a tax-free bonus at the end of the year.
Macron said there would be greater public consultation on issues, but he would not go back on his wealth tax reforms. However, things would not “go back to normal … as if nothing has changed,” he said..
He concluded: “We are at a historic moment in our country. With dialogue, respect, and engagement, we will succeed. My only concern is you, my only combat is for you – our only battle is for France.”
Until now Macron had remained silent on the protests, reportedly to avoid inflaming the unrest. But after Saturday’s violence, the Elysée was desperate to avoid what the gilets jaunes movement calls Act 5.
Protesters have focused their grievances on Macron, who is seen as the arrogant, aloof “president of the rich”. Demonstrations have rung with chants of “Macron resign”. Graffiti sprayed on national monuments and public buildings has been even more personal and obscene.
But while the French historically blame the president for their woes, they also look to the head of state to solve them, so expectations were high.
Earlier in the day, Macron hosted a four-hour roundtable meeting to sound out ministers, leaders of the two houses of parliament, business and union leaders and councillors. Afterwards, those present said the president had listened.
Four weekends of violent protests across the country, particularly in Paris where demonstrations have been hijacked by fringe elements determined to burn, smash and loot across the capital, have left Macron and the entire French political class stunned and wounded.
Everyone was taken by surprise by the speed at which the gilets jaunes movement – named after the high-visibility vests French motorists carry in their vehicles – morphed from a grassroots revolt over an environmental fuel tax into a wider expression of grievances against the president and parliament.
Suddenly it was not about one tax, but an us-and-them conflict pitting ordinary French workers, pensioners and unemployed living mostly in the countryside and struggling to make ends meet, against an “elite” seen as aloof, arrogant and out of touch with the tough reality of life outside the metropolitan bubble.
The government’s decision to drop the eco-tax that sparked the unrest was too little too late. By then, the demands had become wide and varied: higher wages, lower taxes, more spending power.
One unofficial gilets jaunes spokesman accused Macron of offering them “crumbs … when what we want is the whole baguette”.
Talks to calm the volatile atmosphere have been hampered by fact the gilets jaunes have no official representatives or organisation. Most of all they want to be heard.
Their movement has already hit the French economy, forcing the closure of tourist attractions such as the Eiffel Tower and Louvre as well as city shops at what would normally be the busiest time of the year, leading to reduced growth forecasts.