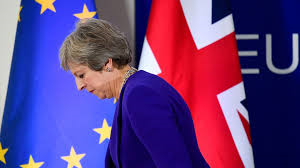 British Prime Minister Theresa May on Monday postponed a parliamentary vote on her Brexit deal to seek more concessions but the European Union refused to renegotiate and lawmakers doubted her chances of winning big changes.
May’s abrupt move less than 30 hours before parliament was to vote opens up a range of possibilities from a Brexit without a deal, a last-minute agreement or another EU referendum.
Admitting she faced defeat on Britain’s potentially biggest political and economic shift since World War Two, May was laughed at by some lawmakers when she said there was broad support for key aspects of her deal reached with the EU last month.
However, “If we went ahead and held the vote tomorrow, the deal would be rejected by a significant margin,” she told parliament of the agreement she clinched after 18 months of tortuous negotiations.
With her position in jeopardy, May said she would now go back to the EU and seek reassurances over the so-called Irish “backstop”, an insurance policy to ensure no return to a hard border on the island of Ireland.
She questioned whether parliament was trying to frustrate the democratic will of Britons to leave the EU and warned that without agreement the world’s fifth largest economy would leave on March 29 without a deal.
The EU reacted coolly, with European Council President Donald Tusk saying it was ready to discuss how to smooth ratification, but that neither the withdrawal agreement nor the Irish backstop would be renegotiated.
“As time is running out, we will also discuss our preparedness for a no-deal scenario,” Tusk said. Brexit will be discussed at a previously scheduled EU summit on Dec. 13-14.
May will first meet Dutch Prime Minister Mark Rutte and German Chancellor Angela Merkel on Tuesday.
Sterling skidded to its weakest level since April 2017, falling to $1.2507. It was trading at $1.50 on the day of the 2016 Brexit referendum. Yields on U.S. 10-year bonds dropped to the lowest since late August.

MAY’S STRATEGY?
The vote postponement marks what many lawmakers cast as the collapse of May’s two-year attempt to forge compromise under which the United Kingdom would exit the EU while staying closely within its orbit.
The EU’s 27 other members, with a combined economic might six times that of the United Kingdom, appeared unlikely to countenance substantive changes which could convince her domestic opponents.
A costly British exit without a negotiated accord looks increasingly likely, French European Affairs Minister Nathalie Loiseau said following May’s decision.
Germany’s Foreign Minister Heiko Maas said there were no possibilities to amend Britain’s 585-page withdrawal deal and Irish Prime Minister Leo Varadkar said preparations for a no-deal Brexit should intensify.
May indicated she was seeking further assurances from the EU on the working of the backstop and would seek to give the British parliament more power over its application to satisfy sovereignty demands.
May said other EU leaders were open to discussion about the backstop, but few in parliament were convinced.
Any assurances May secures from the EU over the contentious backstop will be “completely irrelevant” if they are not included in the withdrawal agreement, lawmaker Jacob Rees-Mogg, a leading Brexit supporter, told reporters.
“It would be transformative if the backstop were removed,” Rees-Mogg said. “But, this is the whole backstop, this isn’t some paragraph saying it will finish in 2025 or something. It has to be out.”

“MAKE WAY”, SAYS LABOUR
The Northern Irish party which props up May’s minority government bluntly told her to ditch the backstop altogether or face the collapse of her deal. The Democratic Unionist Party is upset as the backstop could align Northern Ireland more closely with the EU than the rest of the United Kingdom.
The leader of Britain’s opposition Labour Party, Jeremy Corbyn, said Britain no longer had a functioning government and called on May to “make way” for Labour.
Just a handful of MPs publicly supported her deal on Monday.
May said the deeper question was whether parliament wanted to deliver on the people’s will from the 2016 referendum, or open up divisions with another national vote.
“If you take a step back, it is clear that this house faces a much more fundamental question: does this house want to deliver Brexit?” May asked.
Her decision to halt the vote came just hours after the EU’s top court, the Court of Justice, said in an emergency judgment that London could revoke its Article 50 formal divorce notice with no penalty.
Both May’s ruling Conservatives and the main opposition Labour Party are publicly committed to carrying out Brexit. But a no-deal Brexit is seen as so disruptive, with customs checks potentially blocking ports and hitting trade, that parliament would be under strong pressure to block it.
The ultimate outcome will shape Britain’s $2.8 trillion economy, have far-reaching consequences for the unity of the United Kingdom and determine whether London can keep its place as one of the top two global financial centers.
“The only way not to have no deal is to have a deal and to agree a deal,” May said. Parliament will hold a three-hour emergency debate on Tuesday on May’s decision to defer the vote.