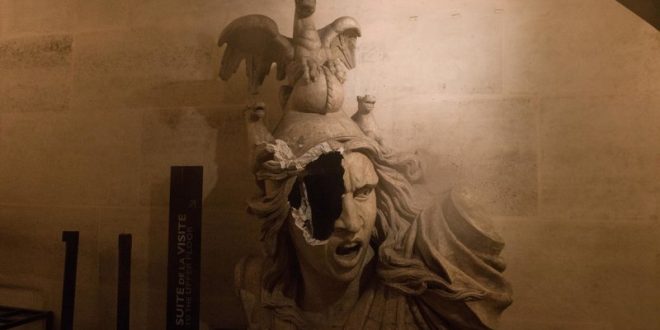 PARIS, FRANCE - 2018/12/01: A statue seen broken near the Arc De Triomphe during a 'Yellow Vest' protest in Paris. Without any political affiliation, the Yellow Vest movement rallies in various cities in France against taxes and rising fuel prices. (Photo by Sathiri Kelpa/SOPA Images/LightRocket via Getty Images)

France’s worst riots in a decade have left destruction across Paris, with even national monuments facing the wrath of anti-government protesters known as gilet jaunes or yellow jackets after the high-visibility jackets they wear on demonstrations.
Thousands of protesters stormed the streets of the French capital over the weekend, leaving torched cars, smashed windows and looted stores in their wake. Police said that 133 people were injured, including 23 police officers. Anger at rising fuel prices and France’s high cost of living has exacerbated fury at French president Emmanuel Macron, seen as a wealthy and aloof figure, oblivious to the struggles of ordinary citizens.
One of the most striking images of the destruction shows a smashed statue of Marianne inside the Arc de Triomphe. The icon of Marianne emerged during the French Revolution of 1789 as a personification of the values of liberty, equality and fraternity and in later years came to represent France itself. She appears on stamps and in popular culture, and most town halls across France hold statues dedicated to her, often remodeled on contemporary French female celebrities such as Brigitte Bardot and Catherine Deneuve.
Photographs and videos on social media show the damage done to other historical artifacts stored at the monument, including smashed displays, defaced statues and graffiti declaring that “yellow jackets will triumph.”
President Macron surveyed the damage from the riot on Sunday, which marked the third straight weekend of riots in the French capital. The city’s prosecutor said that 378 people remain in police custody.