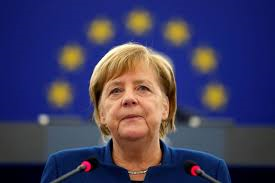 Angela Merkel has called for the creation of a “real, true” European army, echoing a similar call by her French counterpart.
The German chancellor’s backing for the force comes amid a spat with US president Donald Trump, who took offence to a suggestion by Emmanuel Macron that such an army could ensure Europe’s security in the shadow of the United States.
Ms Merkel endorsed the creation of the army while addressing MEPs at the European parliament in Strasbourg.
“We should work on a vision of one day establishing a real, true European army,” Ms Merkel said.
The French president made his call during a radio interview last week: “We have to protect ourselves with respect to China, Russia and even the United States of America.
“We will not protect the Europeans unless we decide to have a true European army.”
He added: “When I see President Trump announcing that he’s quitting a major disarmament treaty which was formed after the 1980s Euro-missile crisis that hit Europe, who is the main victim? Europe and its security.”
The suggestion angered Mr Trump, who sent a series of hostile tweets about the comments.
On Tuesday the US president tweeted: “Emmanuel Macron suggests building its own army to protect Europe against the U.S., China and Russia. But it was Germany in World Wars One & Two – How did that work out for France?
They were starting to learn German in Paris before the U.S. came along. Pay for NATO or not!”
The election of Mr Trump to the White House appears to have given more urgency to the cause of boosting the EU’s defence capabilities, with leaders warning they cannot simply rely on the United States.
European Commission president Jean-Claude Juncker said last year that “deference to Nato can no longer be used as a convenient alibi to argue against greater European efforts”.
Ms Merkel’s intervention is significant because France has historically been the strongest and most vocal proponent of an EU army, with its neighbour tentatively endorsing proposals for a joint command structure for military interventions.
Eurosceptics reacted angrily to the speech. Conservative MEP David Campbell Bannerman said: “This is one of the scariest speeches I have heard as an MEP in my nine years. Merkel is an out-and-out European federalist and we should not be pandering to her as if she is on our side. She is on the side of the superstate.”
In 2016 then defence secretary Sir Michael Fallon said the UK would use its veto to stop the creation of any EU army. However, the UK is leaving the EU, and will therefore no longer have any say in its governance.
A number of proposals have been put on the table for how EU nations could cooperate more closely on defence. The European Commission says closer defence cooperation “is not about creating an EU army”.
Thirty-four joint missions by member states have been launched under the EU flag since 2003 under the bloc’s common security and defence policy.
Under the “permanent structured cooperation” initiative legislated for in 2009 and activated in 2017, 25 of the 28 armed forces are in the process of stepping up cooperation between their militaries. Denmark, Malta and the United Kingdom have decided to opt out of the voluntary system.
Ms Merkel made her comments about the EU army in a wider speech to MEPs about the future of Europe. Mentioning Brexit only once, she described Britain’s looming departure from the union as a “deep wound” to the continent.