Home / Last News / Midterms 2018: High early turnout a good omen for Democrats – but the party is still on edge 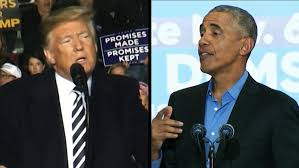 Midterms 2018: High early turnout a good omen for Democrats – but the party is still on edge

‘All across the country, what I’m seeing is a great awakening,’ says Barack Obama but many in the party are wary of a surprise like in 2016

One of the major factors that would help Democrats in their quest to control of at least one chamber of Congress in the midterms is a surge in younger and first-time voters.
Early voting turnout is up across all age ranges, racial groups and educational categories and while older voters still make up a disproportionate segment of would-be voters, anything that makes the turnout more diverse should be music to the ears of the Democrats.
Of the more than 30 million people who have voted early – a significant increase over the last midterms in 2014 – the biggest increases have come in younger voters, and those that rarely vote.
Among voters aged 18-29, turnout is up in 39 of 41 states for which data is available, according to polling for Harvard University’s Institute of Politics. For voters aged 30-39, turnout is up in all 41 states where data is available.
In past midterm elections the perceived wisdom was that those who voted early were generally those who would be enthused to come out and vote anyway, but it appears that this may have changed this time around.
One analysis from Democrat data firm TargetSmart suggests that more than 6 million of those ho have voted early rarely vote at all, and that more than 1 million others are first-time voters.
Democrats are aware of what might be coming – former president Barack Obama was clear about that during a campaign stop in Virginia on Monday. He said that people had woken up to the need to protect things such as equality and immigration rights at the ballot box.
“All across the country, what I’m seeing is a great awakening,” he said. “People woke up and said ‘Oh, we can’t take this for granted. We’ve got to fight for this’.”
However, the fact that all these new early voters are from groups that may not have gone to the polls before means that they are unpredictable. Will the numbers hold up the same on Tuesday? Or will the early voter figures be a false dawn?
A September poll for MTV/Associated Press found that 61 per cent of Democrats aged 15 to 34 said they felt anxious over the midterms. That could translate to turnout, but also could leave young people thinking their choice won’t matter.
For a party that suffered the shock result of 2016, such reliance on figures that have not been tested has left many Democrats on edge.
“We’re kind of just in the bed-wetting phase now,“ Democratic pollster John Anzalone, a former Hillary Clinton campaign staffer, told Politico.
All the signs are there that the Democrats might be able to at least retake control of the House of Representatives – including the latest polling – and other leading members of the party are acting upbeat.
There were “opportunities to flip red to blue” across the nation, Democratic National Committee Chairman Tom Perez told a crowd in Wisconsin. ”We’re focused on the issues that people care about,” he said. “If you look at the closing argument of Trump, it’s a closing argument of fear and division.”
But having been bitten once two years ago, there are plenty fearing that another surprise might await them on Tuesday night.