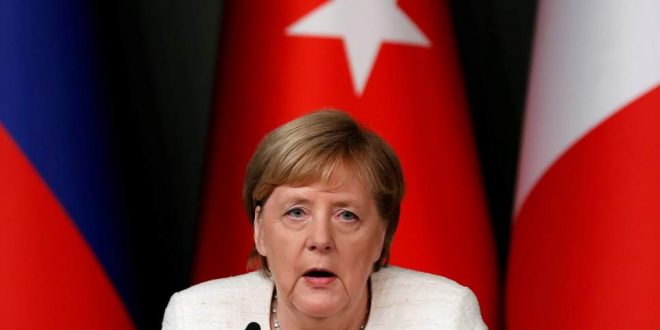 Angela Merkel and her governing party allies have lost significant support in a state election in Germany while the Greens’ share of the vote doubled.
Projections showed Ms Merkel’s conservatives heading for an extremely lacklustre win in the vote for the central Hesse region’s state legislature.
Her centre-left governing partners were on course for a dismal result, running neck-and-neck with the Greens for second place.
The result has prompted calls for the chancellor’s administration to get its act together quickly.
Ms Merkel’s conservative Christian Democratic Union (CDU) was defending its 19-year hold on Hesse, previously a stronghold of the centre-left Social Democrats (SPD), the chancellor’s federal coalition partners in Berlin.
There was widespread pre-election speculation that a disastrous result for either or both parties could further destabilise the national government, prompting calls for the Social Democrats to walk out and possibly endangering Ms Merkel’s own position.
Andrea Nahles, the Social Democrats’ leader, said that “the state of the government is unacceptable”.
She said her party would insist on Ms Merkel’s governing coalition agreeing on “a clear, binding timetable” for implementing projects, and that how that is implemented ahead of an already-agreed midterm review next autumn will show “whether we are still in the right place in this government”.
Hesse’s conservative governor, Volker Bouffier, told supporters that “the message this evening to the parties in the government in Berlin is clear: people want less argument, more objectivity, more solutions.”
Ms Merkel’s chief of staff, Helge Braun, said that the national government must now pull together and “show we are solving the problems that really move people.”
Projections for ARD and ZDF public television, based on exit polls and partial counting, gave the CDU 27-28 per cent support and the centre-left Social Democrats about 20 per cent.
When Hesse last elected its state legislature in 2013 – on the same day that Ms Merkel was triumphantly elected to a third term as chancellor – they won 38.3 per cent and 30.7 per cent, respectively.
That would be the worst result in the region for the Social Democrats since the Second World War.