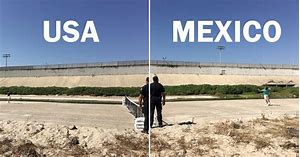 At least 800 troops are expected to be sent to the US-Mexico border after a request from Donald Trump – who says he is “bringing out the military” in response to a caravan of thousands of refugees and migrants that is making its way towards America.
Mr Trump claimed in his tweet that he will use military forces to “stop people at the border,” to address what he calls a “national emergency.”
Defence Secretary James Mattis is expected to sign the order as early as Thursday, with reports that the number of troops deployed could reach 1,000
The president does have the ability to do send the military, but troops do not have a lot of power to stop undocumented immigrants. They cannot legally detain or arrest anyone trying to enter, but they can provide aerial surveillance. The military will provide logistical support, like vehicles, tents, and equipment to border patrol agents.
Mr. Trump’s tweets are in response to a migrant caravan, consisting of thousands of Central Americans – mostly from Honduras feeling violence in their country – who to cross and seek asylum or work in the United States.
In response, the president has threatened to cut aid to Honduras, Guatemala and El Salvador, unless Mexico successfully stops the caravan. Mr Trump has repeatedly said, without evidence, that there are criminals and drugs in the caravan.
There are already about 2,000 National Guard troops assisting at the border under a previous Pentagon arrangement.
Other presidents have sent the military to the border as well. President George W Bush deployed National Guard troops to the border in 2006, and President Barack Obama did the same in 2010.
On both the campaign trail and during his presidency, Mr. Trump has supported strengthening the southern border to prevent undocumented crossings. He has spoken many times of building a wall separating the borders of Mexico and the United States, although such an immense project would take years and cost billions.
Mr. Trump has also claimed in his tweets – with less than two weeks until crucial midterm elections that democrats were responsible for “weak laws” that allowed immigrants from the country’s southern border in easily. He wants those laws “chanded,” which presumably means “changed.”