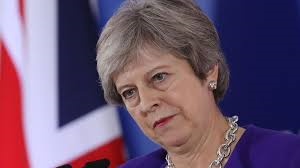 UK PM May to address her lawmakers after attacks over Brexit

British Prime Minister Theresa May will address Conservative Party lawmakers at a private meeting in parliament on Wednesday after anger at her Brexit negotiating strategy prompted some of them to discuss toppling her.
May asked to address her divided party’s powerful “1922 Committee” where she can expect questions from lawmakers, some of whom have discussed forcing a leadership contest.
With just over five months to go until the United Kingdom is due to leave the EU on March 29, May’s Brexit negotiation has stalled over a disagreement on a fallback plan for the border between Northern Ireland and Ireland.
Many business chiefs and investors fear politics could scupper an agreement, thrusting the world’s fifth largest economy into a “no-deal” Brexit that they say would spook financial markets and silt up the arteries of trade.
Companies will suffer and criminals could benefit from the inevitable border disruption that will ensue if Britain leaves the European Union without a deal, the country’s public spending watchdog said on Wednesday.
May failed to clinch a deal at an EU summit last week and her decision to signal the possibility of extending a post-Brexit transition period, keeping Britain under EU governance with no say in it, to help end the deadlock has angered both hardline supporters of Brexit and pro-EU lawmakers.
But many Conservative Party lawmakers are wary of toppling a leader on the eve of Britain’s most significant political and economic move since World War Two. Many also fear an election could bring the opposition Labour Party into power.
“FIRST CIRCLE OF HELL”
The Times newspaper reported that leaked cabinet papers suggested that May’s Brexit plans could leave Britain in a “long-running” multi-year transition period despite her promise that it would last only a few months.
May’s office said the newspaper’s report was “nothing more than a partial reflection of advice given to ministers and not of decisions taken”.
The Times said her attorney-general, Geoffrey Cox, cast May’s Brexit plans at a cabinet meeting on Monday as amounting to Dante’s “first circle of hell”.
Ever since losing her party its majority in parliament with a botched bet on a 2017 snap election, May has faced talk of a leadership challenge.
But there was a change of tone in the British media this week, with some newspapers carrying unusually bloodthirsty language by unidentified opponents.
One said May was entering “the killing zone”, while another said May should “bring her own noose” to the 1922 committee meeting.
A vote of no-confidence in May would be triggered if 48 Conservative lawmakers submit letters to the chairman of the 1922 committee to demand such a vote.
The Sunday Times said 46 had now been sent and the BBC’s political editor said on Monday that the 48 number had not yet been reached.