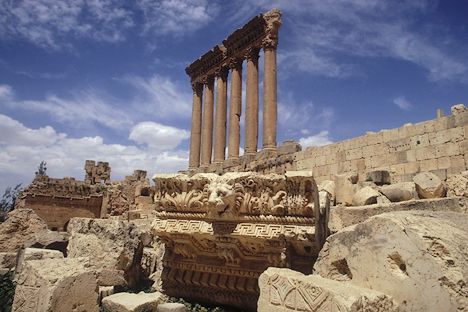 Monuments discovered in Lebanon indicate that it is one of the oldest human settlements in the world, with over 5,000 years of recorded history. The Phoenicians, who invented the alphabet, were the early inhabitants of the country. They rose to fame on the shores of Lebanon where they engaged in navigation and trade. The Lebanese coastal cities Sidon, Tyre, Beirut and Byblos flourished with sea trade as they exported wood and metal work, glass, olive oil, wine, spices, fabrics, etc. … and spread the alphabet to various parts of the world. Those cities were famous for their temples and high level skill in ship buildings. The Phoenicians established commercial outposts throughout the Mediterranean. Strategic colonies were planted in Cyprus, Rhodes, Crete, Carthage, Corsica and Sardinia and their ships sailed around the African Continent. They were the ancient “masters of the sea”. Lebanon’s advantageous geographical location at the edge of the Mediterranean Sea and at the crossroad of three ancient continents had made the country a residence and passage for many civilizations and cultures. In the subsequent centuries, the country was occupied by the Assyrians, the Persians, the Greeks, the Romans, the Arabs, the Crusaders, the Ottoman Turks and the French. The Lebanese culture has over the millennia evolved by borrowing from the various groups. The Ottoman Empire held the longest successive period of control over Lebanon with more than four hundred years. At the end of World War II, the empire was dismantled and Lebanon was then placed under French mandate. On September 1920, General Gouraud proclaimed the establishment of the State of Greater Lebanon, the predecessor of modern Lebanon, with Beirut as its capital. The new state was granted a flag, merging the French flag with the Lebanese cedar. The former Ottoman districts including Beirut and Bekaa were annexed to the former autonomous region of Mount Lebanon. Lebanon’s area expanded from 3500 to 10,452 square kilometers and its population increased from 414000 to 628000 inhabitants.

General Gouraud was replaced by Weygand and then by Serrail who faced a Druze revolt in 1925. Serrial was followed by Senator Henri de Jouvenel, who proclaimed the Lebanese Constitution on 23 May 1926 and appointed Charles Debbas as first President of Republic. Debbas was subsequently succeeded by Habib el-Saad and Emile Edde.

With the outbreak of World War II, the Lebanese demanded their right to gain independence. On 21 September, 1943 Sheikh Bechara el Khoury was elected President of the Republic and Riad el Solh was assigned to form the government. Lebanon formed its first democratic government of independence and amended the constitution ending the mandate. The French responded by arresting the President of the Republic, the Prime Minister and other cabinet members like Adel Osseiran, Camille Chamoun, and Abdel Hamid Karami and exiling them to an old citadel located in Rashaya.   The Lebanese Members of Parliament reunited in the house of Speaker Sabri Hamade and created the Government of Bechamoun. France eventually yielded to the augmenting pressure of the Lebanese people and the demand of numerous countries. The prisoners were released on 22 November, 1943 and that day was declared the official Lebanese Independence Day. In 1945, Lebanon joined the Arab League and the United Nations. On December 31, 1946 French troops withdrew completely from Lebanon.  The year 1948 witnessed the Palestinian Catastrophe as hundreds of thousands of refugees fled their home and were displaced throughout the Lebanese territory.  Disagreements among the Lebanese started to surface with regard to the essence of the conflict with the new Israeli enemy. Developments escalated from the Baghdad Pact in 1958 to the war between Arabs and Israel and the signing of Cairo Agreement in 1969 which allowed the Palestinians to launch military operations against Israel using the Lebanese territories as a base.

In 1970, following the Black September events, the PLO (Palestine Liberation Organization) leadership and thousands of fighters were expelled from Jordan and regrouped in Southern Lebanon. The enlarged PLO presence and the intensification of fighting on the Israeli-Lebanese border stirred up internal unrest in Lebanon. These developments helped precipitate the Lebanese Civil War, in which the PLO would be engrossed from 1975 until the mid-1980s. Palestinian forces were one of the main reasons that led to a Christian-Muslim conflict in Lebanon in 1975–1976 which ended with the occupation of Lebanon by peace-keeping forces from several Arab countries.

In 1982, Israel invaded Lebanon and sieged Beirut. Multinational forces arrived to supervise the evacuation of the Palestinian fighters from Lebanon to other Arab countries. Israel tried to force the 17 May peace agreement on Lebanon but it was not ratified, and was soon abrogated by the Lebanese government. Israel eventually withdrew from most of the Lebanese territories to what was defined as the “Security Zone” in South Lebanon.

In 1989 the Taif Agreement marked the beginning of the end of the Lebanese civil war that has been raging for decades.  On 25 May 2000, the Israeli troops were forced out of the Lebanese territories in the  South (with the exception of Shebaa Farms and Kafr Shuba Hills) signaling the end of a military occupation that has lasted more than two decades. In 2005, the assassination of Prime Minister Rafic Hariri led to massive political changes in Lebanon, including the Cedar Revolution and the withdrawal of Syrian troops.

The July War broke off on 12 July 2006 when Israel executed a massive attack on Lebanon. The enemy targeted civilians and severely damaged the Lebanese civil infrastructure. On 11 August 2006, the United Nations Security Council unanimously approved Resolution 1701 in an effort to end the hostilities. A cease fire took effect in the morning of 14 August.