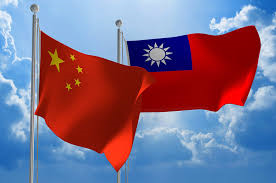 BEIJING/WASHINGTON (Reuters) – China expressed anger on Thursday after the U.S. Senate passed a bill promoting closer U.S. ties with Taiwan, but the step drew praise from the self-ruled island which pledged to deepen cooperation.

The move adds to tensions between China and the United States, already at loggerheads over trade, with President Xi Jinping’s close economic advisor Liu He in Washington this week to try and avert a trade war.

Several top U.S. steel and aluminum executives have been invited to the White House later on Thursday for what could be a major trade announcement, according to two people familiar with the meeting.

U.S. President Donald Trump has vowed to take steps to crack down on imports of steel and aluminum and has been considering imposing hefty tariffs on imports of the metals from China and other countries.

Beijing considers democratic Taiwan to be a wayward province and integral part of “one China”, ineligible for state-to-state relations, and has never renounced the use of force to bring the island under its control.

Chinese Foreign Ministry spokeswoman Hua Chunying said though the bill was not legally binding and seriously violates the “one China” principle.

“China is strongly dissatisfied with this and resolutely opposes it, and has already lodged stern representations with the U.S. side,” she told a daily news briefing.

The “one China” principle is the foundation for China-U.S. ties, Hua added.

China urges the United States to cease official exchanges with Taiwan and “prudently and appropriately handle issues related to Taiwan to avoid seriously interfering with and damaging China-U.S. relations”, she said.

The Senate passed the Taiwan Travel Act by unanimous consent. It passed the House of Representatives in January, also without opposition. The legislation only needs Trump’s signature to become law.

The bill says it should be U.S. policy to allow officials at all levels to travel to Taiwan to meet their Taiwanese counterparts, permit high-level Taiwanese officials to enter the United States “under respectful conditions” and meet with U.S. officials, and encourage Taiwanese economic and cultural representatives to conduct business in the United States.

White House officials did not immediately respond when asked if Trump planned to sign the legislation. It would be unusual for a president to veto a measure that passed unanimously.

Taiwan’s Foreign Ministry thanked the United States for the unanimous support for the bill and for the U.S. government’s increasingly friendly and open attitude toward Taiwan.

“The Foreign Ministry will keep developing an even more substantive cooperative relationship with the United States, to promote both sides’ joint values and mutually-beneficial interests,” it said.

The United States has no formal ties with Taiwan but is bound by law to help it defend itself and is the island’s main source of arms. China regularly says Taiwan is the most sensitive issue in its ties with Washington.

China’s hostility toward Taiwan has risen since the election as president of Tsai Ing-wen from the pro-independence Democratic Progressive Party (DPP) in 2016.

China suspects Tsai wants to push for formal independence, a red line for Communist Party leaders in Beijing, though she has said she wants to maintain the status quo and is committed to ensuring peace.

On Wednesday, two former Taiwan presidents, Lee Teng-hui and Chen Shui-bian, backed a bid for a referendum on Taiwan independence next year, though Taiwan’s government has not supported the plan.

Were such a vote to happen, China could feel it has to activate its Anti-Secession Law, which allows it to use force on Taiwan if deemed necessary to prevent the island from seceding.