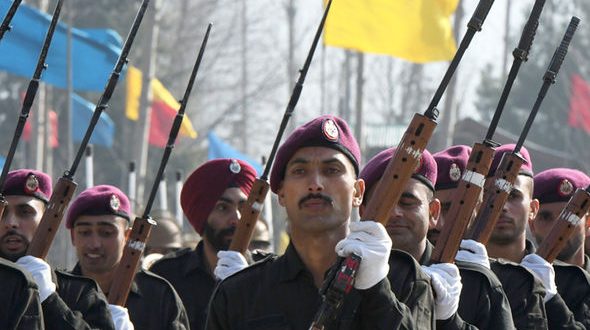 INDIA has declared that Pakistan “will pay” for an attack on an army base in the Jammu region that killed at least six people, the country’s defence minister starkly warned.

Nirmala Sitharaman declared that Pakistan was “expanding the arc of terror” following the devastating attack and vowed to avenge the killings.

She stated: “Our intelligence inputs indicate that these terrorists were being controlled by their handlers from across the border.

“Pakistan is expanding the arc of terror resorting to ceasefire violations (on the border) to assist infiltration. Pakistan will pay for this misadventure.”

Following the attack, New Delhi pointed the finger at Pakistani military group Jaish-e-Muhammad for carrying out the attack on the army base that houses over 3,500 troops.

The defence minister also disclosed that one of the four militants are believed to have stayed outside the camp’s premises during the attack.

She continued: “The terrorists have been eliminated although there was information of four terrorists in the area… likely that the fourth (attacker) was a guide and didn’t enter the premises.”

Pakistani group Lashkar-e-Taiba (LeT) declared that it was involved in the horrific attack and paid tribute to the militants involved in having a “knowledge of war tactics”.

Meanwhile, the chief minister of Jammu and Kashmir, Mehbooba Mufti, desperately cried out for dialogue between the two South Asian nations to end the “bloodshed”.

She tweeted: “Dialogue with Pakistan is necessary if we are to end the bloodshed. I know I will be labelled anti-national by news anchors tonight but that doesn’t matter.

“The people of Jammu and Kashmir are suffering. We have to talk because war is not an option.”

Jammu is located in the India held Kashmir (IHK) – the area has been the source of conflict for the two nations that have seen devastating attacks launched by both sides.

Pakistan accused India of creating a “smear campaign against Pakistan and the deliberate creation of war hysteria”.

The spokesperson for the country’s foreign office added: “It is a well-established pattern that Indian officials begin making irresponsible statements and levelling unfounded allegations, even before any proper investigation in an incident has been initiated.

“A particular segment in the Indian media runs with their innuendos to malign Pakistan and whips up public frenzy.

“We are confident that the world community would take due cognisance of India’s smear campaign against Pakistan, and the deliberate creation of war hysteria.”

The attack started in the early hours of Saturday when three militants entered the base armed with AK-47’s, one is believed to have stayed outside.

Nine other people were injured in the horrific act.

The four attackers were later killed by Indian Special Forces after a firefight that lasted a day, according to Lieutenant Colonel Devender Anand.

The latest attack is part of a series of moves that have sharply escalated tensions between the two nuclear-armed nations.

Most of the conflict between the two countries has taken place in the boundary separating the Indian-controlled region of Kashmir and the Pakistan province of Punjab.

India has long accused Pakistan of training and arming militants and helping them infiltrate across the heavily militarised Line of Control into Jammu and Kashmir, India’s only Muslim majority state.

Since India-Pakistan split 71 years ago, the nations have fought each other in three wars, two over the Kashmir region, which they both claim in full but rule in part.