Home / Last News / North Korea will not flinch an inch! Pyongyang warns US to BACK OFF on nuclear war threats 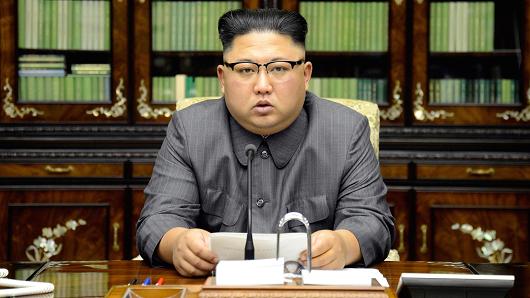 North Korea will not flinch an inch! Pyongyang warns US to BACK OFF on nuclear war threats

NORTH KOREA warned it “would not flinch” from “the road to bolstering up the nuclear forces” unless the USA backed down from its “hostile” and threatening policy towards Pyongyang.

And Pyongyang’s permanent representative to the United Nations said the United States and Donald Trump should “take the lead” in rolling back “nuclear doctrines of aggressive nature such as ‘preemptive strike’”.

The report from state-sponsored news agency KCNA claimed the US was solely responsible for the war of words with North Korea and suggested America should be first to dismantle its own nuclear arsenal.

But it also warned North Korea would not “flinch an inch” from continuing to bolster its own nuclear weapons development program should the US continue with what Pyongyang perceives to be a “hostile” policy.

The report read: “To all intents and purposes, the nuclear issue on the Korean peninsula was spawned and developed into the present phase today because of the US and, accordingly, the blame for it is entirely on the US.

The DPRK will neither put the nukes and ballistic rockets on negotiating table in any case nor flinch even an inch from the road to bolstering up the nuclear forces chosen by itself, unless the US hostile policy and nuclear threat to the DPRK are fundamentally eliminated.

“Should the US ignore the repeated warnings and pounce upon the DPRK with military force at last, the DPRK will inflict severe punishment with its power of self-reliance and self-development it has so far consolidated.”

The KCNA went on to accuse the US of exaggerating the potential conflict between Washington and Pyongyang , suggesting its push for tougher sanctions was “disguising the issue as one between the DPRK and UN” rather than with the USA.

And it added: “The US is the one and only country in this world that massacred hundreds of thousands of innocent civilians by using nuclear weapons in the real war.

“No other country in this world has been exposed to the US nuclear threat for a long time, directly with intensity as much as the DPRK.”

But it added “the main reason international terrorism is not yet annihilated” was because of US interference as KCNA claimed it foiled a US-backed attempt to depose Kim earlier this year.

The report read: “In May this year, a group of heinous terrorists who infiltrated into our country on the orders of the Central Intelligence Agency (CIA) of the US and the South Korean puppet Intelligence Service with the purpose of carrying out a state-sponsored terrorism against our supreme headquarters using biological and chemical substance were caught and exposed.

“This palpably shows the true nature of the US as the main culprit behind terrorism.”

Today, US President Donald Trump also further ramped up fears World War 3 could break out as he tweeted: “Presidents and their administrations have been talking to North Korea for 25 years, agreements made and massive amounts of money paid hasn’t worked, agreements violated before the ink was dry, makings fools of US negotiators.