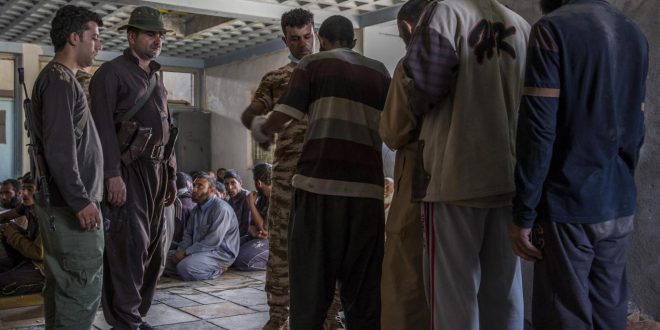 The prisoners were taken to a waiting room in groups of four, and were told to stand facing the concrete wall, their noses almost touching it, their hands bound behind their backs.

More than 1,000 prisoners determined to be Isis fighters passed through that room this past week after they fled their crumbling Iraqi stronghold of Hawija. Instead of the martyrdom they had boasted was their only acceptable fate, they had voluntarily ended up here in the interrogation centre of the Kurdish authorities in northern Iraq.

For an extremist group that has made its reputation on its ferociousness, with fighters who would always choose suicide over surrender, the fall of Hawija has been a notable turning point.

The Iraqi military ousted Isis from Hawija in 15 days, saying it had taken its forces only three days of actual heavy fighting before most of the extremists grabbed their families and ran. According to Kurdish officials, they put up no fight at all, other than planting bombs and booby traps.

One of the men smelled so bad that when he was taken into the small interrogation room, those inside were startled. He filled the doorway, appearing even larger than his actual size. Everyone in the room seemed scared of the man, even though his hands were tied behind his back. His face had only a wisp of black stubble on the chin.

Kurdish interrogators allowed a dozen of the surrendered fighters to be interviewed by a reporter as they arrived at the local headquarters of the Asayish, the Kurdish intelligence service, in Dibis, near the Kurds’ front lines opposite Hawija. Officers monitored all interviews.

Many of the fighters claimed to have been just cooks or clerks. So many said they had been members of Isis for only a month or two that interrogators suspected they had been coached to say that. Gone was the contempt for the world’s opinion, spewed out in one violent video after another — many of them made in Hawija, where grisly killings, especially of Kurdish prisoners, were the norm during their three-year reign over that Sunni Arab city in northern Iraq.

Most of the prisoners, though, claimed to have never seen a beheading, or even heard of such a thing.

At first, the beardless fighter seemed an exception, admitting defiantly that he had been fighting for the group for two years, alongside family members. He readily gave his name: “Maytham Muhammed Mohemin,” he said, practically spitting it out.

The interrogator, Lieutenant Pisthiwan Salahi, said Mohemin was not only an Islamic State soldier but also a member of an elite suicide squad known as the Seekers of Martyrdom, according to informers.

Kurdish officials have been perplexed by the number of fighters who have surrendered. Many of the militants said they were ordered by their leaders to turn themselves in to the Kurds, who were known to take prisoners instead of killing them.

Mohemin had shrunk back into his red chair after an hour of talking and looked much smaller than before.

The lieutenant did not take his eyes off him for a second. “They’re just planning to go underground and make sleeper cells,” he said.

Mohemin shook his head. “This is the end of this state,” he said.