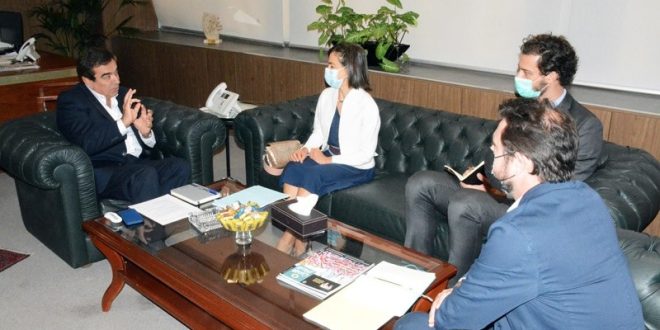 Minister of Information, George Kordahi, on Thursday received in his office a delegation of the French Embassy in Beirut, including French Ambassador’s Media Adviser Jean Heilbronn, Director of the French Institute Marie Buscail and Audiovisual Media Attaché at the Embassy Guillaume Duchemin, in the presence of the Minister’s Adviser for Francophone Media Affairs, Elissar Geagea.

Discussions reportedly touched on strengthening cooperation between the Ministry of Information and the French Embassy.

Buscail dwelt on the joint projects and activities between the Embassy and the Ministry, including the issue of the archive that was launched last June.

The French official underscored the French Embassy’s support to the Ministry of Information and the public media.

Conferees underlined the importance of the Francophonie audio-visual media and the exchange of expertise at the media level.