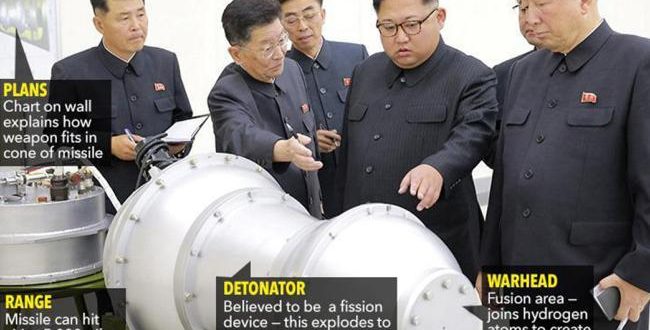 AT LEAST 200 people have reportedly died at Kim Jong-un’s nuclear test site, and there are fears of a radioactive leak.

A TUNNEL at an underground North Korea nuclear site has reportedly collapsed with up to 200 people killed, according to reports.

The collapse happened at the Punggye-ri nuclear test site in the northeast of the country on October 10, according to Japan’s TV Asahi.

The disaster has prompted fears of a massive radioactive leak, The Sun reported.

According to South Korea’s Yonhap news agency, a North Korean official said the collapse happened during the construction of an underground tunnel.

Some 100 people are said to have been trapped by the initial tunnel collapse, with a further 100 lost in a second collapse during a rescue operation, Asahi reported.

The Japanese report has yet to be verified, and some experts including leading North Korean analyst and global security expert Ankit Panda expressed doubts over the report.

News is often slow to come out of the secretive country which remains largely isolated from the world.

Lee Eugene, a spokeswoman at South Korea’s unification ministry, was also unable to confirm the event.

“We are aware of the report but do not know anything about it,” she said.

Research Associate at California’s James Martin Centre for Nonproliferation Studies, Shea Cotton, told news.com.au said there probably has been some sort of collapse that injured, trapped, and killed people.

“I suspect though that this happened back in September or earlier in October and this is just the first we’ve heard of it,” he said.

“There were two quakes at the site picked up by USGS that made a few folks nervous because they looked like possible tests but ended up being collapses there.”

However Mr Cotton said he thinks the magnitude of what happened is overstated.

“I’ve seen a couple folks speculate that the people killed in the accident were some of their nuclear scientists and that this could slow down the program,” he said.

“I don’t think that’s the case. Chances are the people who died were slave labourers forced to work in horrible conditions to advance the regime’s interests.

“And I also don’t think you could stop their program with a few of their scientists dying, I think it’s much too far along now.”

In a series of tweets, Frank V Pabian, from respected North Korea analysis website 38 North said it was possible North Korea’s sixth nuclear test could have caused tunnels to collapse.

He said if this was as bad as reports suggested it could have a significant impact on future tunnelling under Mount Mantap and delay future activity there for some time.

However he said it was “inconceivable” any workers were in the tunnels during the most recent test.

The accident is believed to have been caused by Kim Joing-un’s sixth nuclear test which weakened the mountain.

The head of the Korea Meteorological Administration, Nam Jae-Cheol, told a parliament committee meeting another North Korean test could lead to such an accident.

South Korea has detected several largely small-sized earthquakes near the northeastern nuclear test site the North used for its sixth and most powerful bomb explosion in September.

Experts say the quakes suggest the area, which was also used for the North’s previous underground nuclear tests, is now too unstable to conduct more tests there, the Associated Press reported.

Lee Won-Jin, a Korea Meteorological Administration researcher, said the analysis of satellite photos indicated there were landslides around the Punggye-ri test site after the September test.

He also said there now might be a hollow space inside Mount Mantap, the granite peak where the North’s test site is located, citing studies of past underground nuclear tests by the United States.

Mr Lee said the North’s past six nuclear tests were not reported to have caused any radiation damage to neighbouring countries.

Experts said if the peak crumbles, clouds of radioactive dust and gas would blanket the region, the South China Morning Post reported.

Geophysicist Wen Lianxing and his team at the University of Science and Technology of China in Hefei, Anhui province, said they were “confident” underground detonations were occurring underneath the mountain.

They posted an analysis of data collected from more than 100 seismic monitoring sites across China.

This has narrowed down the location of Pyongyang’s nuclear tests with a margin of error of just 100m. They’ve all been under the same mountain.

Seismic data showed the underground test triggered an earthquake of magnitude 6.3, around 10 times more powerful than the fifth test a year ago.

Satellite images showed the blast caused numerous landslides around the Punggye-ri test site, according to the Washington-based 38 North monitoring project.

But Chinese nuclear weapons researcher and chair of the China Nuclear Society Wang Naiyan told the Morning Post a collapse could spark a major environmental disaster.

He said: “We call it ‘taking the roof off’. If the mountain collapses and the hole is exposed, it will let out many bad things.

“A 100 kiloton bomb is a relatively large bomb. The North Korean government should stop the tests as they pose a huge threat not only to North Korea but to other countries, especially China.”

Satellite photos taken just a day after the blast reveal new gravel and scree fields shaken loose by the blasts at an elevation of about 2205m.

Analysts said these appeared more numerous and widespread than those caused by previous detonations — which would be in keeping with the increased size of the bomb.

Wang said there are limited mountains in North Korea that are “suitable” to conduct a nuclear test.

He said if the North had simply drilled into the side of the mountain, this increased the risk of “blowing the top off”.

Nuclear devices are often tested underground to prevent radioactive material released in the explosion reaching the surface and contaminating the environment.

This method also ensures a degree of secrecy.

A test site is carefully geologically surveyed to ensure suitability — usually in a place well away from population centres.

The nuclear device is placed into a drilled hole or tunnel usually between 200-800m below the surface, and several metres wide.

A lead-lined canister containing monitoring equipment is lowered into the shaft above the chamber.

The hole is then plugged with gravel, sand, gypsum and other fine materials to contain the explosion and fallout underground.

The release of radiation from an underground nuclear explosion — an effect known as “venting” — would give away clues to the technical composition and size of a country’s device.