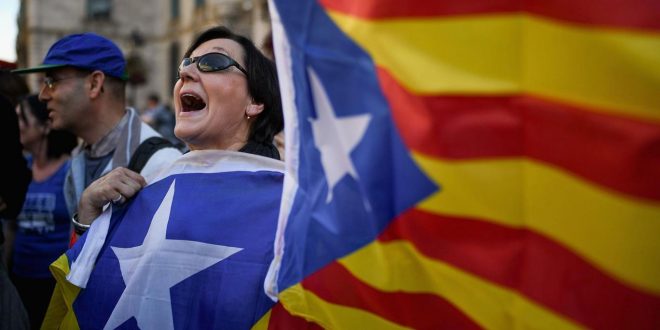 Spanish officials say that even as he tweeted to suggest he was outside the regional presidency building, Carles Puigdemont was already making plans to escape to Belgium

The first working day for the administration of Catalonia, Europe’s newest “independent” country, unfolded in an extraordinary and dramatic fashion with its leader reportedly fleeing to Brussels as he faced charges brought by the Spanish government for rebellion, sedition and embezzlement.

Carles Puigdemont travelled to the Belgian capital, according to officials, as Spain’s chief public prosecutor announced that he was seeking indictments carrying prison sentences of up to 30 years against the Catalan President and other members of the government in Barcelona, which has been recently dissolved by Madrid.

Reports of the flight came 24 hours after Belgium’s Minister for Asylum and Migration stated that Mr Puigdemont can seek refuge in the country. “Catalan people who feel politically threatened can ask for asylum in Belgium and that includes President Puigdemont, this is 100 per cent legal,” Theo Francken had declared.

In a day of accusation, recrimination and confusion, Mr Puigdemont posted a photograph of the regional presidency building with the Catalan flag flying beside that of Spain, accompanied by a smiley emoticon and the words “good morning”. This led to the assumption that he had, as he had vowed, turned up in office as usual.

But, Spanish government officials say, he was already making plans to escape to Brussels. The move spreads the Catalan crisis, which shows no sign of ending, across the Continent. The European Union has refused to recognise the region’s declaration of independence, but Mr Francken’s Flemish nationalist party has strong ties with Catalan separatists and its officials stated that all attempts would be made to prevent Mr Puigdemont’s extradition to Spain if he sought sanctuary in Belgium. VRT, the Belgian state broadcasting station said: “Carles Puigdemont is almost certainly coming to Brussels and is said to be on his way. Mr Puigdemont will meet lawyers and political representatives here.”

The Spanish government had reacted angrily to Mr Francken’s asylum offer, with Esteban Gonzalez Pons, of the governing Popular Party, accusing him of “violating principles of solidarity and loyal collaboration between the countries of the European Union” and “making serious accusations against the work of Spanish judges and the rule of law in Spain”.

The Spanish Attorney General, Jose Manuel Maza, announced that Mr Puigdemont and his colleagues “have produced an institutional crisis that ended with a unilateral declaration of independence with total disregard of our Constitution” and that the accused must answer summons “taking into account the seriousness of the facts and/or crimes imputed”.

According to some reports, Mr Puigdemont drove from Catalonia across the French border to Marseilles with five members of the Catalan cabinet to catch the Brussels flight.

As news of Mr Puigdemont’s supposed Brussels journey spread there was further internationalisation, albeit in a limited form, of the Catalan issue with Jan Skonberne, the deputy leader of Slovenia’s democratic party, part of the ruling coalition, insisting that his country will recognise the region’s independence in the near future.

The Spanish government has announced that elections will be held in Catalonia on 21 December. The result of that is expected to be very close with a recent poll by El Mundo showing anti-independence parties getting 43.4 per cent of the vote to the pro-independence group’s 42.5 per cent.

Catalonian separatists had initially refused to take part in the December ballot, insisting that the vote for independence in a controversial referendum earlier in the month must stand. But Mr Puigdemont’s PDeCat (Catalan Republican Party) and Vice President Oriol Junqueras’s Esquerra Republicana de Catalunya (ERC) stated that it would field candidates. Sergi Sabria, an ERC MP, held that Madrid has called an election “which is illegitimate, meant to be a trap. But taking part on 21 December is an opportunity to better consolidate the Republic”.

A vast demonstration was staged on Sunday by anti-independence Spanish nationalists, with estimates of attendance numbers varying between 300,000 to a million, and there were some chants in memory of Franco and a few Nazi salutes.

There was a heavy deployment of police in the streets in anticipation of possible trouble, with Catalan ministers insisting that they would carry on the duties of their “independent” administration. The Spanish government had ordered that they had “a few hours” to collect their belongings, but faced arrest if they stayed beyond that in their offices.

One Catalan minister, Josep Rull i Andreu, did turn up at his office tweeting “at my desk, carrying out the duties that I was tasked with by the people of Catalonia”. But he left 50 minutes later. Cesar Puig, the Catalan secretary-general, went to the interior ministry and was said to have wandered around before leaving. “He said goodbye,” said the janitor. “He did not say when he was coming back, he did not take any of his things.”

The twists and turns of the day left some Catalonian nationalists bemused. Goncal Ignasi, a 23 year old student, said: “My friends and I don’t know what’s going on. If Mr Puigdemont has had to leave the country then it is because Spanish judges cannot be trusted. This used to happen in time of Franco, are we going back to those days?

“Whether Mr Puidgement has left or not,” Mr Ignasi said, ”there is no chance of us accepting things the way they were in the past and Spain taking control. The future is very worrying.”