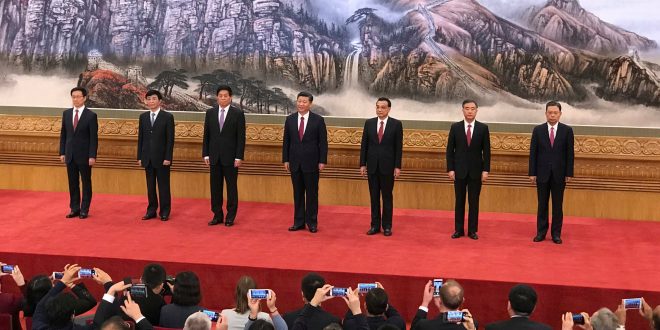 BEIJING — President Xi Jinping thrust China into a new era of strongman politics on Wednesday, unveiling a leadership team without a likely successor among the six officials who will help him rule for the next half decade.

In a nationally televised ceremony, Mr. Xi introduced the new members of China’s highest council of power, the Communist Party’s Politburo Standing Committee, on the red carpet of the Great Hall of the People in Beijing. In addition to Mr. Xi and China’s premier, Li Keqiang, the committee included five new members, all of them men in their 60s.

“Over the past five years, we’ve done a lot. Some work has been finished, some we must continue with,” Mr. Xi, 64, said after briefly introducing each of the other committee members who stood stiffly in line. “A new era needs a new look, and even more needs new accomplishments,” he added.

The debut followed a weeklong party congress in Beijing that underlined the breadth of Mr. Xi’s political ambitions. On Tuesday, its final day, the congress elevated Mr. Xi to the same exalted status as the nation’s founding father, Mao Zedong, by enshrining “Xi Jinping Thought” in the party’s constitution.

The five new Standing Committee members are party leaders with long careers in Chinese politics, including one of Mr. Xi’s longtime allies and a scholar of international relations. But the party declined to name a younger leader to the committee who might succeed Mr. Xi when his second term as president ends in 2023.

“By taking such a risk, he shows himself to be more like Mao than we originally thought — he demonstrates his power by overturning institutions,” said Professor Shirk, a former State Department deputy assistant secretary for China policy.

In a possible nod to such concerns, most of the new members to the Standing Committee selected by Mr. Xi were not his longtime associates, though most had worked with him in some capacity. Mr. Li, the premier who is currently Mr. Xi’s No. 2, was at one time seen as a possible rival to Mr. Xi to lead the country.

Among the new members were Wang Yang, 62, a vice premier who promoted himself as a can-do reformer while party chief of Guangdong Province in southern China, and Han Zheng, a former mayor of Shanghai who is credited with guiding that city’s emergence as China’s glittering financial and business capital. Neither had a long history of working closely with Mr. Xi before he became president in 2012.

Other new members have worked alongside Mr. Xi for years. They included Li Zhanshu, his longtime friend and aide, and Wang Huning, a former professor turned party ideologue who has helped craft Mr. Xi’s speeches and reports.

The seventh member, Zhao Leji, served as head of the party’s organization department and will assume leadership of the party’s anticorruption agency, succeeding Wang Qishan, perhaps Mr. Xi’s most powerful lieutenant. Mr. Wang has passed the normal retirement age, but there had been speculation that Mr. Xi might try to keep him on the committee.

“Xi has seemingly chosen magnanimity with the list,” said Christopher K. Johnson, an expert on Chinese elite politics at the Center for Strategic and International Studies in Washington. “Of course, that’s easy to do when you’ve achieved your two core objectives — making yourself the party’s untenured ideological arbiter and refraining from signaling the succession.”

One question is whether the new lineup will help Mr. Xi move forward with his vision of a China that is internationally strong, ideologically disciplined and economically prosperous. Some China watchers have said they expect Mr. Xi to place more emphasis on improving living standards for China’s 1.3 billion people, after spending his first five years in power imposing a tight control over the party and also the military, China’s other political power center.

After decades of rapid growth, China faces growing economic challenges that include mountains of debt held by local governments and inefficient state-owned conglomerates. Few experts expect Mr. Xi will take big steps toward market liberalization, but many believe he must move to clean up financial risks.

In his speech in the Great Hall, Mr. Xi noted that next year would mark 40 years since Deng Xiaoping thrust China into an era of economic overhauls, and said that he would also press ahead with changes to “firmly and unwaveringly deepen reform in every aspect.”

Mr. Xi used last week’s congress to showcase what he calls the “China Dream,” saying it was his mission to guide the nation into a new era of renewed strength and global leadership. The congress also blessed Mr. Xi’s one-man style of rule by adding his name and ideas into the party’s constitution, a move that in effect declares any effort to challenge him to be an act of ideological heresy.

“The party constitution is a foundational guide to the party’s ideology,” said Wu Qiang, a political analyst in Beijing who formerly taught at Tsinghua University. “By adding ‘Xi Thought,’ that means this is the general line that must be followed for the next five years, and probably long after that.”

Under Mao and then Deng, the party suffered a series of failed succession arrangements that ended in purges and division. From the 1990s, Chinese leaders established a pattern of installing likely successors well in advance. Mr. Xi himself entered the Standing Committee in 2007, before taking power in 2012. Before him, Hu Jintao succeeded Jiang Zemin after waiting in the committee for a decade.

The inclusion of one or two officials in their 50s in the new Standing Committee would have offered a signal that they were also being groomed to take over in five years. Instead, the makeup of the new leadership will ignite speculation that Mr. Xi wants to extend his influence beyond the end of his second term.

China’s national constitution says that he cannot serve more than two terms as president, but some experts say Mr. Xi could try to stay on in other posts, as the party’s general secretary or chairman of the armed forces, or create a new role to preserve his power. Others believe Mr. Xi will formally retire in five years, confident that incoming leaders will be staunch loyalists who uphold his policies.

While no next-generation leaders made it into the Standing Committee, some with the right age and track record were promoted to the Politburo, a broader 25-member council that is less powerful than its Standing Committee.

They included Chen Min’er, 57, who worked as a propaganda functionary with Mr. Xi when they were both officials in the eastern province of Zhejiang. Some experts had expected Mr. Xi might catapult Mr. Chen into the Standing Committee this time, a move that would have made him the heir apparent.

While recent generations of Chinese central leaders were often engineering graduates, the new members of the Standing Committee come from more diverse educational backgrounds. Mr. Zhao has an undergraduate degree in philosophy, and Mr. Han received a master’s in political economy.

Over all, the new members of the committee were “decidedly all of Xi’s guys, indicating that he wants a team around him that will implement his vision,” said Evan S. Medeiros, the former senior director for Asian affairs in the National Security Council under President Barack Obama. “On economic issues, one could tentatively say that this Politburo Standing Committee is more reform-minded than the current lineup.”