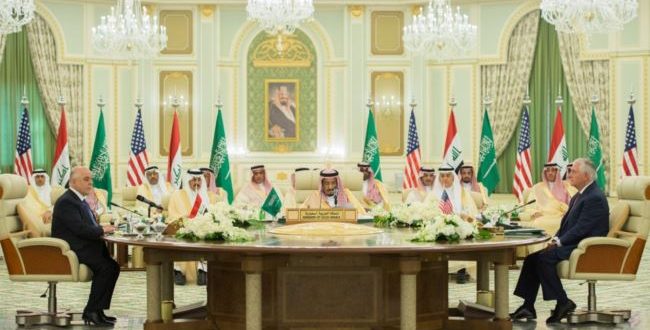 U.S. Secretary of State Rex Tillerson on Sunday promoted improving ties between Saudi Arabia and Iraq as a way to counter Iran’s growing military assertiveness in the region.

Tillerson, participating in the initial meeting of the Saudi Arabia-Iraq Coordination Committee in Riyadh, told Saudi King Salman and Iraqi Prime Minister Haider al-Abadi that their improving links showed “great potential.” He cited the August reopening of a major border crossing between the two countries and the resumption of direct flights between Baghdad and Riyadh.

“Both represent the beginning of what we hope will be a series of even more tangible actions to improve relations and strengthen cooperation on a host of issues,” Tillerson said. “Your growing relationship between the kingdom and Iraq is vital to bolstering our collective security and prosperity and we take great interest in it.”

The top U.S. diplomat said the United States is “grateful for this progress and urge you to expand this vital relationship for the stability of the region. The United States stands ready to support continued cooperation between Saudi Arabia and Iraq and we congratulate you.”

Salman said, “We are facing in our region serious challenges in the form of extremism, terrorism as well as attempts to destabilize our countries. These attempts require our full attention. … We reaffirm our support for the unity and stability of our brother country of Iraq.”

Abadi voiced his approval of “the thriving relations between our two brotherly countries. We are open and we want to move away from the past. The region cannot tolerate any further divisions. Interference in the internal affairs of other states should stop.”

Shi’ite-majority Iraq and Sunni-led Saudi Arabia were estranged for several decades following Iraqi dictator Saddam Hussein’s 1990 invasion of Kuwait. But Saudi Arabia reopened its embassy in Baghdad in 2015 after a quarter century, with a Saudi foreign minister visiting last February, followed by the reopening of the border crossing and the resumption of flights between the two capitals.

Still, the relationship between Saudi Arabia and Iraq is complicated by Iranian military actions in the region, with Tehran-backed militias playing a key role in helping Iraqi security forces overtake Kurdish forces in the oil-rich northern city of Kirkuk last week and in defeating Islamic State militants who had taken over parts of Iraq.

Tillerson on Sunday called for Iranian-backed militias and their Iranian advisers to leave Iraq.

“Exactly what country is it that Iraqis who rose up to defend their homes against ISIS return to?” he said.

Tillerson traveled on to Qatar where he held out little hope of seeing an end to the four-month diplomatic standoff between Qatar and a group that includes Saudi Arabia, Egypt, Bahrain and the United Arab Emirates. He said the United States remains concerned about the negative economic and military consequences.

“We again call on all the parties involved to continue to work towards discussion and dialogue and finding a way to deal with the differences,” Tillerson said.

Saudi Arabia, Bahrain, the United Arab Emirates and Egypt cut ties with Qatar, accusing it of promoting terrorism and fostering closer ties with Iran, which Doha has denied.

Tillerson is also visiting Pakistan, India and Switzerland on his six-day trip.