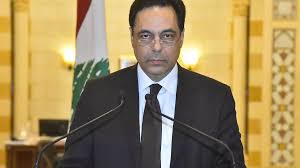 “We are still under the shock of the tragedy that struck Lebanon. This disaster which has hit the Lebanese at the core, occurred as a result of chronic corruption in politics, administration and the State.

I previously said that the system of corruption is deeply-rooted in all the functions of the state; nevertheless I discovered that the corrupt system is bigger than the State, and that the latter is constrained by this system and cannot confront it or get rid of it.

One of the many examples of corruption exploded in the port of Beirut, and the calamity befell Lebanon; but corruption cases are widespread in the country’s political and administrative landscape; other calamities hiding in many minds and warehouses, and which pose a great threat, are protected by the class that controls the fate of the country, threatens the lives of people, falsifies facts, survives on seditions and trades in people’s blood during periods of relinquishment which have become a pattern that repeat itself according to interests, impulses, calculations and fluctuating dependencies.

Today we are facing a great tragedy, and all the forces that are keen on preserving the country and the interests of the people were supposed to cooperate in order to overcome this ordeal, by remaining silent in mourning for the souls of the martyrs, by respecting the grief of the bereaved, parents, siblings, and orphans, by helping people, by healing their wounds, by sheltering them, and by providing assistance to those who have lost their livelihoods.

The magnitude of the tragedy is too large to describe; nevertheless, some live in another time; their only aim is to score political points, deliver populist electoral discourse, and demolish the lingering State’s presence.

They were supposed to be ashamed of themselves, for their corruption has produced this calamity which was hidden for seven years, and God knows how many calamities they are concealing under the cloak of their corruption.

Those people are accustomed to changing their positions to falsify the facts, while what is required is to change them, because they constitute the real tragedy of the Lebanese people.

They have changed and altered a lot in the past, every time there are prospects for getting rid of their corruption.

They did not read well the October 17 Revolution staged by the Lebanese. That revolution was against them, but they did not understand it well. They continued with their practices and calculations, and they thought that they could dilute the Lebanese people’s demands for change, for a fair and strong state, for an independent judiciary, for ending corruption, waste and thefts, for putting an end to financial policies that emptied the State’s treasury, wasted people’s deposits, and placed the country under huge debt burdens, which caused this financial, economic social and living collapse.

But the biggest paradox is that, several weeks after the formation of this government, they tried to throw their sins on the Cabinet and hold it responsible for the collapse, waste and public debt…

No Shyness at all!

This government has gone to great lengths to lay out a road map to save the country.

Every minister in this government has done his very best, for we are keen on preserving the country, its future and the future of our children.

We have no personal interests; all that matters to us is saving the country; we have endured many false accusations and campaigns for the sake of saving the country. But we refused to be lured into futile polemics, for we wanted to work. Nevertheless, fury horns did not stop their attempts to falsify the facts in order to protect themselves and cover up their crimes.

We carried the Lebanese people’s demand for change. But a very thick and thorny wall separates us from change; a wall fortified by a class that is resorting to all dirty methods in order to resist and preserve its gains, its positions and its ability to control the State.

We fought fiercely and honorably, but this battle is unequal. We were alone, and they were all against us. They used all their weapons, distorted facts, falsified evidences, spread rumors, lied to people, committed small and big debaucheries … They knew that we pose a threat to them, and that the success of this government means a real change in this long-ruling class whose corruption has asphyxiated the country.

Today we have reached this point; we are facing an earthquake that struck the country, with all its humanitarian, social, economic and national repercussions. Our first concern is dealing with these repercussions, in parallel with a quick investigation that defines the responsibilities and prevent the application of any statutory limitation to the disaster.

Today we are appealing to the people, to their demand to hold accountable those responsible for this disaster that has been concealed for seven years, to their desire for real change, for a shift from the State of corruption, waste, brokerage and thefts, to a State based on the rule of law, justice, and transparency, a State that respects its citizens.

Faced with this reality, we take a step back, to stand with the people, in order to wage the battle of change with them. We want to open the door to national rescue, a rescue that the Lebanese will participate in achieving.

Therefore, today I announce the resignation of this government.