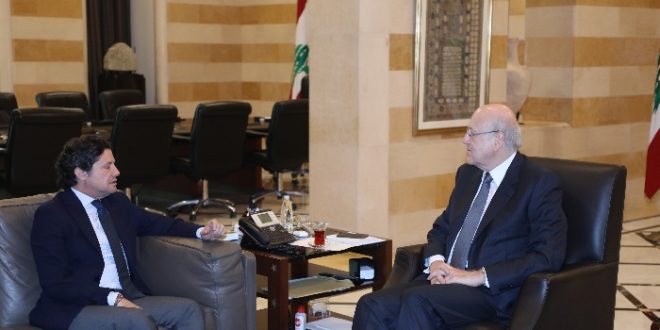 Caretaker Prime Minister, Najib Mikati met at the Grand Serail, with Caretaker Minister of Information, Ziad Makary, with whom he discussed the situation of the media sector in the country and relevant Ministry affairs.

Following the meeting, Caretaker Minister Makary said, “I briefed the Premier on my talks in Djerba-Tunisia, on the sidelines of the Francophone Summit, where I met with a number of heads of state and ministers concerned with the Lebanese affairs.”

He added: “The second issue we discussed pertains to the broadcast of the Qatar FIFA World Cup. I am one of those who do not lose hope; however, we faced a major obstacle, namely the absence of a session of the Council of Ministers. This has hindered the signing of the commercial contract by the Lebanese government, represented either by the Ministry of Telecommunications or Television of Lebanon (TL), as per legal necessity.”

On the other hand, Caretaker Premier Mikati met with MP Strida Geagea, in the presence of the Secretary-General of the Higher Relief Commission, Major General Mohammed Khair.

On emerging, MP Geagea said: “My visit today comes in wake of the recent unfortunate incident that took place in the Cedars. I came today to thank Premier Mikati for commissioning Major General Mohammed Khair, to inspect the damages, and I hoped compensations, even if partially, would be paid for the losses incurred by the company.”

Discussions during the meeting reportedly touched on prospects of helping Lebanon and some joint projects.