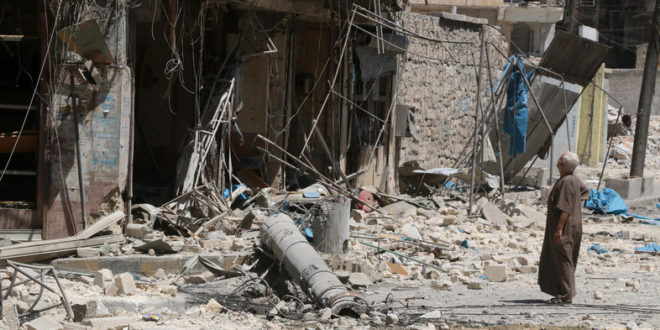 The Russian Ministry of Defense backed a proposal from the UN Syria envoy to organize 48-hour weekly ceasefires to supply humanitarian relief to Aleppo citizens. The first truce could be organized as early as next week.
The proposal – which was originally voiced last week by the UN Syria envoy Staffan de Mistura, who called for 48-hour ceasefires instead of the three hours proposed by the Russian side – has been welcomed in Moscow.
As a means to broaden the scale of the humanitarian mission in Aleppo, the Russian Defense Ministry is ready to back the UN proposal to introduce the 48-hour pauses, which would allow the city’s population to be supplied with food and medication, and for vital infrastructure damaged by terrorist shelling to be restored, the ministry’s spokesman, Major General Igor Konashenkov, said.
A test-run of the 48-hour truces could be organized next week to see if relief can reach civilians safely.
“A more precise date and time will be determined after receiving information about the readiness of the convoys from the UN representatives and receiving confirmation of the security guarantees of their safe travel from our American partners,” Konashenkov said.

The Russian Ministry of Defense proposed that humanitarian aid be delivered to Aleppo by two separate routes to western and eastern parts of the city, as the eastern part of Aleppo is controlled by militia while the western part is controlled by government forces.
The first route will start from Gaziantep, Turkey, through a border checkpoint, and by the Castello road to the eastern part of Aleppo. The second one will use the road to the east of Aleppo which encircles the city to the Handarat area, and then by the Castello road to the western part of the city.
The Ministry of Defense added that Moscow is ready to discuss the issues concerning the safety of UN humanitarian convoys with Damascus and expects the same security guarantees from Washington regarding the so-called “moderate opposition” and other units.
The UN has welcomed Russia’s support of the decision to put hostilities in Aleppo on 48-hour pauses weekly to make sure humanitarian convoys reach their destinations, Farhan Haq, deputy spokesman for the secretary-general, said on Thursday.
The special envoy for Syria has been informed by the Russian Ministry of Defense, Haq said, adding that the UN is ready to begin the delivery of aid and is looking forward to receiving further details on introducing humanitarian pauses in Aleppo.
“The special envoy welcomes the Russian Federation statement, and the United Nations humanitarian team is now set to mobilize itself to respond to this challenge,” de Mistura said in a statement, as cited by Reuters.

“Our plan is to collectively work out the operational details, and be ready for delivery as soon as possible,” he also noted.
Russia’s intention to start a trial 48-hour humanitarian pause as early as next week has been welcomed by German Foreign Minister Frank-Walter Steinmeier as well.
On July 28, Russia and Syria launched a large-scale humanitarian operation for Aleppo residents, opening three corridors for civilians and those ready to lay down arms to exit the city. Four more corridors were opened several days later.
On Tuesday August 16, Russian long-range Tu-22M3 bombers and Su-34 tactical bombers delivered airstrikes in Syria in Aleppo, Deir-ez-Zor and Idlib provinces against installations of Daesh [Arabic acronym for “ISIS” / “ISIL”] terrorists, taking off from Hamadan Airbase in western Iran. The operation was covered by Su-30SM and Su-35S jet fighters which took off from Russia’s Khmeimim Airbase in Syria.
Last week positions southeast of Aleppo were taken by nearly 7,000 heavily armored terrorists, the Russian Defense Ministry reported. Syrian state news agency SANA reported that militants shelled residential areas in the southwestern neighborhood of Hamdania, killing 13 civilians.
In the period from August 7-10 “nearly 1,000 militants were killed and over 2,000 injured,” the Russian General Staff told journalists.
Earlier, Moscow suggested introducing daily three-hour ceasefires for humanitarian passages from the city to take effect from August 11. The proposal was welcomed by the United Nations aid chief Stephen O’Brien and US State Department spokesperson Elizabeth Trudeau.

Some “50 tons of food, basic necessities, medicine as well as 93 tons of water” were delivered to Aleppo following the establishment of “safe routes” since the end of July, according to Lieutenant General Sergey Rudskoy, chief of the main operations department of the Russian General Staff.