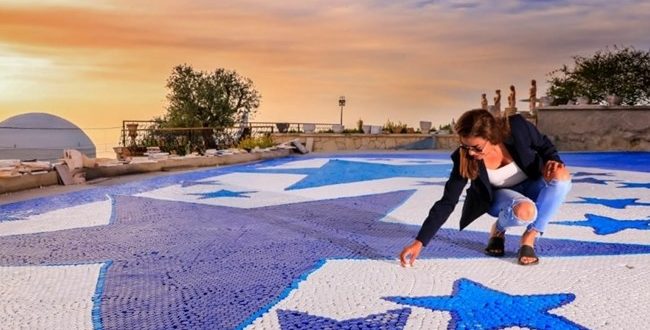 A Lebanese environmental activist won a second Guinness World Record title for creating the largest mosaic made of bottle caps in a public park.

Caroline Chaptini put together the mosaic in the northern Lebanese town of Miziara near her parent’s house, after collecting 40,000 bottle caps comprised of five different colors. She glued the bottle caps to the ground to make a two-dimensional mosaic, depicting an image of a crescent moon with stars.

“Due to [coronavirus] social distancing measures, I had to execute the project on my own in around 160 hours. Severe weather conditions forced me to restart multiple times,” Chaptini was quoted as saying in a statement from Guinness World Records.

“This is my gift for Lebanon, the environment and the kids of the Arab world,” she said.

Chaptini had previously won a Guinness World Record title in December 2019 for the tallest plastic bottle sculpture measuring 28.1 meters in height alongside the municipality building of Chekka.

All the bottle caps were sent to a recycling company to generate funds that were donated to the children’s cancer organization Kids First Association.