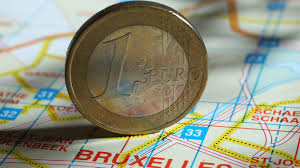 Euro zone business activity hit another record low during April in another sign that the coronavirus pandemic is causing severe economic damage across the region.

The IHS Markit Purchasing Managers’ Index, which measures both the services industry and manufacturing, dropped to 13.5 in April, according to the preliminary data. In March, the same index had already recorded its biggest ever single monthly drop to 29.7. A contraction in PMI numbers — a figure below 50 — indicates a likely fall in economic growth overall.

Williamson added that this year’s second-quarter activity could “record the fiercest downturn the region as seen in recent history.”

Euro zone countries have been some of the hardest hit by the virus, with Italy, Spain, France and Germany among the top five nations worldwide with the highest number of infections.

Most European governments introduced lockdown measures to contain the spread of the virus. As a result, their economies were brought to a standstill, with restaurants, shops, movie theaters and other services closed to the public.

The International Monetary Fund (IMF) has forecast a 7.5% contraction for the euro zone in 2020.

European leaders are due to discuss further stimulus measures Thursday afternoon. Euro zone finance ministers have put together a half a trillion euro package to deal with the economic shock from the pandemic, but every EU government agrees that more funding is still needed.

Speaking to CNBC Thursday,  Williamson from IHS Markit, said: “I cant say I am optimistic (about the EU meeting).”

“I think whatever measures are implemented you’ve got shock here that will be hard to completely remove from the system,” he added.

Earlier in the session, Germany’s flash index came in at 17.1, a record low, versus a figure of 35.0 the month before. This was worse than analysts had been expecting with Phil Smith, principal economist at IHS Markit, saying it “paints a shocking picture of the pandemic’s impact on businesses.”

In a separate release, U.K. flash PMIs also showed a sharp fall in activity. The latest reading came in at 12.9 in April, from 36 in March.