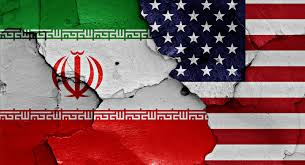 Washington is preparing to impose fresh sanctions on Iran from Monday as US President Donald Trump said a day earlier he was not seeking war with Tehran after a senior Iranian military commander warned any conflict in the Gulf region could spread uncontrollably and threaten the lives of US troops.

“I’m not looking for war,” Trump said on NBC’s Meet the Press program on Sunday.

US Secretary of State Mike Pompeo repeated to reporters on Sunday that Washington was prepared to negotiate with Tehran with no preconditions.

“They know precisely where to find us,” said Pompeo, who is travelling to Saudi Arabia and the United Arab Emirates to “ensure we’re strategically aligned” with those countries, which are regional rivals of Iran.

Trump said he would impose new sanctions on Iran from Monday but added he wanted to make a deal to boost its declining economy in a move to ease tensions after the downing of an unmanned US drone this week.

On Thursday, Iran shot down a US intelligence drone, which they insist was flying over its territory but that Washington said was in international airspace.

Trump later said he had called off a military airstrike to retaliate because it would’ve killed 150 people.

On Saturday, the US president said the government would impose new sanctions on Tehran.

Military action was “always on the table,” the president said but added that he was open to reaching a deal with Iran that he said would bolster the country’s flagging economy.

Later he tweeted: “We are putting major additional Sanctions on Iran on Monday. I look forward to the day that Sanctions come off Iran, and they become a productive and prosperous nation again.”

“Regardless of any decision they (U.S. officials) make… we will not allow any of Iran’s borders to be violated. Iran will firmly confront any aggression or threat by America,” Foreign Ministry spokesman Abbas Mousavi told the semi-official Tasnim news agency on Saturday.

To prove the drone had been shot down over Iranian territory, Foreign Minister Mohammad Javad Zarif published a map on Twitter with coordinates that allegedly showed the drone flying over Iran’s territorial waters.

US Secretary of State Mike Pompeo said in a statement on Saturday that the United States had “shown beyond any doubt” that the drone was in international airspace.

“When the Iranian regime decides to forgo violence and meet our diplomacy with diplomacy, it knows how to reach us,” he said. “Until then, our diplomatic isolation and economic pressure campaign against the regime will intensify.”

World powers have called for calm and sent in envoys for talks to try to ease a dispute that has pushed up the price of oil.

Andrew Murrison, Britain’s minister for the Middle East and North Africa, said on Sunday that he had “open, frank and constructive” talks with Iranian government representatives in Tehran.

“I reiterated the UK’s assessment that Iran almost certainly bears responsibility for recent attacks on tankers in the Gulf of Oman,” and called for such activity to stop, Murrison said.

German Chancellor Angela Merkel called on Saturday for a political resolution of the crisis, adding: “That is what we are working on.”

Iran has threatened to breach the deal if the European signatories to the agreement fail to salvage it by shielding Tehran from US sanctions.

“The Europeans will not be given more time beyond July 8 to save the deal,” Mousavi said, referring to Iran’s deadline of 60 days that Tehran announced in May.