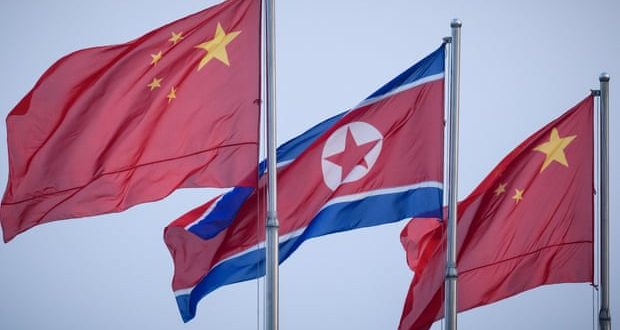 President Xi Jinping has landed in North Korea for a historic trip to Pyongyang, rebooting a troubled alliance as he and North Korean leader Kim Jong-un face their own challenges with US president Donald Trump.

Xi’s visit is the first by a Chinese president to North Korea in 14 years, after relations between the cold war-era allies deteriorated over Pyongyang’s nuclear provocations and Beijing’s subsequent backing of UN sanctions.

It also comes amid a breakdown in talks between Pyongyang and Washington over the North’s nuclear programme, months after Kim’s second meeting with Donald Trump ended in failure.

Xi will pay a two-day state visit with his wife, Peng Liyuan, foreign minister Wang Yi and other officials, according to state broadcaster CCTV. Xi is expected to pay homage at Pyongyang’s Friendship Tower, a monument to the Chinese troops who saved the North from defeat during the Korean war. In recent days soldiers and workers have been sprucing it up.

Throughout the capital, Pyongyang, Chinese flags have been raised in key locations and along roads, alternating with North Korean emblems.

Analysts expect Xi to use his state visit, arranged to coincide with the 70th anniversary of China-North Korea ties, to demonstrate Beijing’s influence in the region.

“For North Korea, the coming meeting will serve to show the US that China has its back and to send a message to Washington it should stop its maximum-pressure posture,” said Lim Eul-chul, professor of North Korean studies at Kyungnam University.

The summit is also designed to strengthen ties between the two neighbours after years of friction over Pyongyang’s missile and nuclear programmes and China’s support for UN security council sanctions. The two were expected to discuss economic ties and aid, with reports that China may send hundreds of thousands of tons of rice to drought-stricken North Korea after the visit.

In a rare commentary in the Rodong Sinmun, the newspaper of North Korea’s ruling party, Xi suggested China could play a role in bridging the gap between the North and the US over denuclearisation.

February’s talks between Kim and Trump in Hanoi ended without an agreement after the sides differed on how far North Korea should go in dismantling its nuclear programme in return for sanctions relief.

Hailing the “irreplaceable” friendship between North Korea and China, Xi outlined a “grand plan” for permanent stability in east Asia, adding that Beijing would play an active role in “strengthening communication and coordination with North Korea and other relevant parties” in nuclear talks.

Observers expected Xi to endorse North Korean demands that the US reciprocate with sanctions relief for every step the regime takes towards dismantling its nuclear facilities.

However, Zhao Tong, North Korea expert at the Carnegie Tsinghua Centre, a think tank in Beijing, said he does not expect any “substantive discussions” on denuclearisation during the meeting, because “China and North Korea do not have enough mutual trust.”

Kim has made four trips to Beijing to since March last year. He has also held two summits with Trump, three with the South Korean president, Moon Jae-in, and this April travelled to Moscow to meet the Russian president, Vladimir Putin.

On Thursday, South Korea urged Kim to meet Moon again before Trump visits Seoul next week after attending the G20 summit in the Japanese city of Osaka, while the US said its door remained “wide open” for nuclear talks.

Stephen Biegun, the US special representative for North Korea, said stalled talks could restart without preconditions. “The door is wide open to negotiations and … we expect and hope that in the not too distant future we will be reengaged in this process in a substantive way,” he told an Atlantic Council forum in Washington.

Biegun said the US was willing to discuss all of the commitments Trump and Kim made at their first meeting in Singapore last year, including security guarantees for North Korea, but added that progress would require North Korea to take “meaningful and verifiable” steps towards denuclearisation.

“We have every expectation that President Xi will continue to send constructive but appropriate messages during his meetings,” he said.

Speaking at the same event, Biegun’s South Korean counterpart Lee Do-hoon called for a fourth North-South summit to be held within days. “I urge North Korea to respond to president Moon’s outstanding invitation to hold an inter-Korea summit, if possible, before President Trump visits Korea next week,” Lee said.