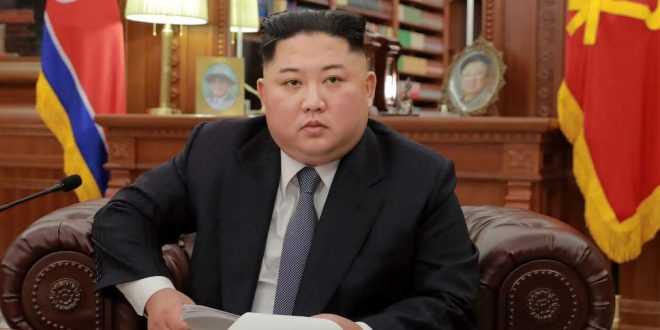 ‘I am always ready to sit together with the US president anytime in the future,’ says Pyongyang’s leader

North Korea’s leader Kim Jong-un has said that he is ready to meet with Donald Trump for nuclear weapon talks, but that his country will be forced to “explore a new path” if the US did not ease sanctions.
In a nationally televised New Year address, Mr Kim said denuclearisation of the Korean peninsula was his “firm will”. He said that North Korea had “declared at home and abroad that we would neither make and test nuclear weapons any longer nor use and proliferate them”.
Kim added that Pyongyang had “taken various practical measures” and if Washington responded “with trustworthy measures and corresponding practical actions … bilateral relations will develop wonderfully at a fast pace”.
“I am always ready to sit together with the US president anytime in the future, and will work hard to produce results welcomed by the international community without fail,” Mr Kim said.
However, with negotiations between the US and North Korea having stalled since Mr Trump’s and Mr Kim’s historic summit in Singapore in June scepticism will be rife about Pyongyang’s intentions after Mr Kim said he would not abide pressure from Washington.
Mr Kim warned that North Korea might be “compelled to explore a new path” to defend its sovereignty if the United States “seeks to force something upon us unilaterally … and remains unchanged in its sanctions and pressure”.
Mr Kim’s reference to pledges not to make nuclear weapons could indicate a first official reference to actually taking that step, although it was not clear if this would have conditions attached. While Pyongyang conducted no nuclear or missile tests last year, satellite images have pointed to continued activity at related facilities.
North Korea has called for the US to lift sanctions and declare an official end to the Korean War of 1950 to 1953 in response to its own moves to dismantle a nuclear testing site and a key engineering facility. After the meeting in June, Mr Trump called off some joint military exercises with South Korea with Mr Trump calling it a show of good faith. However the State Department has kept up pressure with sanctions.
Mr Trump has said a second summit with Mr Kim is likely in January or February, though he wrote on Twitter last month that he was ”in no hurry“.
There was no immediate comment from the White House to Mr Kim’s message and the State Department declined to comment.
The state of Washington-Pyongyang relations contrasts with the progress made between the two Koreas in 2018. Having held three summits with South Korean President Moon Jae-in in the last 12 months, Mr Kim used his New Year’s address to say inter-Korean relations had entered a “completely new phase”.
He also offered to resume key inter-Korean economic projects banned under international and South Korean sanctions, without conditions.
Mr Moon’s presidential office welcomed Mr Kim’s speech, saying it carried his ”firm will“ to advance relations with Seoul and Washington.