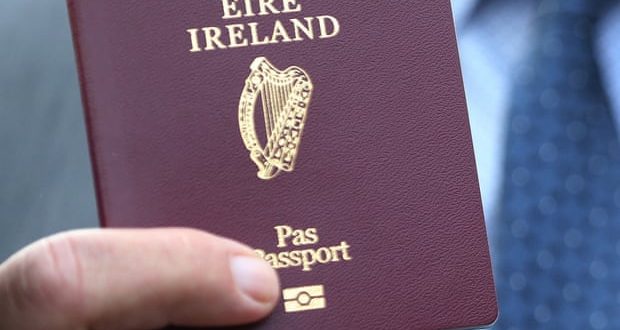 Record number of Britons seeking Irish passports ahead of Brexit

The number of British citizens applying for Irish passports rose by 22% in 2018, Ireland’s foreign office said on Monday, more than doubling the total of annual applications since Britain voted to leave the European Union.
Almost 100,000 eligible Britons sought to hang onto their EU citizenship via a passport from their nearest neighbour this year, up from 81,000 last year and 46,000 in 2015, the year before the Brexit vote led to a sharp rise in applications.
Anybody born in the Irish Republic or Northern Ireland, or with an Irish parent or grandparent, is entitled to an Irish passport – a total of about 6 million British citizens. They are able to hold dual citizenship.
Registrations for Irish passports in Northern Ireland, whose citizens can hold both an Irish and British passport as the province is part of the United Kingdom, rose by 2% in the year to the end of December.
With three months left until the UK is due to leave the EU on 29 March, the draft divorce deal reached between both sides is floundering ahead of a planned vote in the British parliament next month, opening up a range of possibilities from a Brexit without a trade deal to calling it off entirely.