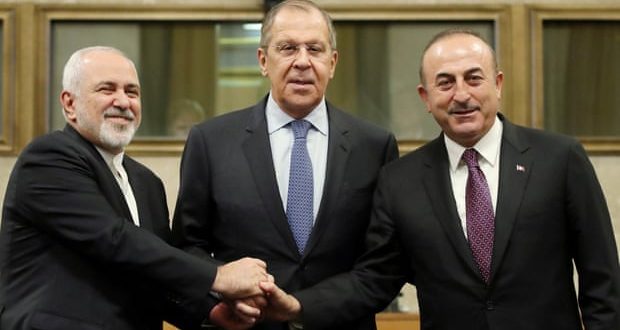 The three self-appointed guarantors of the Syrian peace process – Russia, Turkey and Iran – have spurned efforts by the UN to change the composition of a committee due to write a new constitution for the country.
The 150-strong committee, due to start work next year, could pave the way for UN-supervised elections and a possible peace process that would encourage millions of refugees to return to their homeland.
The agreement on the committee’s formation was formally reached by the three countries on Tuesday in Geneva and the proposals passed to the UN special envoy for Syria, Staffan de Mistura, for his endorsement and for consideration by the UN security council on Thursday.
The Geneva agreement was signed off by the Turkish foreign minister, Mevlüt Çavuşoğlu, his Russian counterpart, Sergei Lavrov, and Iran’s Javad Zarif, underlining how the west has lost control of the Syrian crisis to the trio of countries in the so-called Astana Group.
Without taking questions, Lavrov read out a brief statement saying the three countries believed the committee could start to meet in Geneva early next year and would lead to “a viable and lasting Syrian-owned, Syrian-led, UN-facilitated political process”.
The UN said Russia rejected five names that De Mistura wanted to add to the list, and the envoy’s absence from the brief press conference did not bode well.
In a statement, De Mistura said there was an extra mile to go in the marathon to construct a credible and balanced constitutional committee, and his successor would have to take up the task in the new year. De Mistura stands down at the end of the year after four years as special envoy.
The Russian refusal to make further concessions will anger the US, but the state department’s leverage in Syria as anything but a spoiler is limited.
The official Syrian opposition, the Syrian Negotiating Committee, has previously complained that the proposed committee is not politically balanced and may not touch sufficiently on the powers of the president.
Russia first promised to set up a constitutional committee for Syria in January at a meeting in the Black Sea resort of Sochi, but disagreement over the committee’s composition, as well as fighting in Syria, slowed progress.
The proposed committee consists of government supporters, opposition members and a neutral group from civilian society. The true political allegiance of the third group is critical since it will hold the political balance of power.
De Mistura is said to be under heavy pressure from the trio of countries to accept the makeup of the constitutional body, but he may leave the decision to UN security council in New York on Thursday.
He said at the weekend: “The last word is with us, with the UN, not with any country, as good and as powerful as they may be.”
The US special envoy for Syria, James Jeffrey, speaking on Monday at the Atlantic Council thinktank in Washington, said the official Syrian opposition’s stance represented “a huge problem for De Mistura”.
He said: “The question throughout the entire negotiation on the committee has been: is the regime willing to give an iota of compromise to any effort by the international community to try to resolve this on terms other than the regime’s? The regime has not won this conflict. Over 40% of the territory is in other people’s hands. Over 100,000 including YPD Kurdish forces are still active, and the areas where Assad regime rules have only 50% of the population, and it is largely rubble, and it will require $300-400bn to rebuild. Who is going to pay that bill?
“There is a strong readiness on the part of western nations not to ante up money for that disaster unless we have some kind of idea that the government is ready to compromise and thus not create yet another horror in the years ahead.”
But Jeffrey said if an agreement on the committee could be reached, the path to a UN-monitored national ceasefire would be the next logical step.
De Mistura, in briefing the UN security council this week, will have to address US suspicions and set out how he thinks the committee can be made more balanced and credible. Details of how the committee would operate or be chaired appear to be only sketchily agreed. President Bashar al-Assad wants the committee to meet in Damascus, a venue rejected by the opposition.
If the UN and the Astana group are able to reach agreement, the outcome would represents a form of legacy for De Mistura at the end of his period in office. He has been criticised by some for failing to do more to secure an agreement during the seven-year civil war, but his defenders say he could not have brokered an agreement if the key external powers were unwilling to lever the forces they sponsored inside Syria to compromise.
On Sunday Çavuşoğlu said he could envisage Turkey accepting Assad remaining as president if he was elected in free and fair elections. Turkey, along with Saudi Arabia, has done the most to support the severely weakened opposition.
For more than a year the European Union has said it will not provide reconstruction money for Syria unless democratic elections are agreed and supervised by the UN in which refugees are given a right to vote.