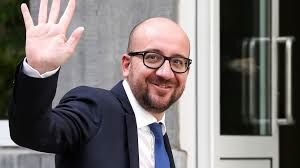 Belgium’s government of four years has fallen on the issue of migration after the country’s parliament rejected an appeal from prime minister, Charles Michel, for its support for a minority administration.
Michel was forced to offer his resignation to the King of the Belgians, Philippe, after the Socialist party, with support from the Greens, proposed a vote of no confidence in his administration.
The country is now braced for a snap election in January. The head of Michel’s party said the opposition had rejected the government’s “fair offer” in order to secure a political scalp.
“The Socialist opposition and Greens wanted a trophy and have it”, said David Clarinval, chairman of the liberal Reform Movement party.
Following the departure of the New Flemish Alliance (N-VA), the largest of the coalition government’s four parties, Michel had appealed to the federal parliament to back a minority administration until the country held its general election next May.
Michel was seeking a “coalition of good will” to see him through until the poll of 26 May, warning that the country would be otherwise left rudderless for months should his government fall.
But in a dramatic day in the Belgian parliament, the Socialist party refused to countenance such a proposal.
During an evening sitting of the chamber, Michel told MPs in response that he would be offering his resignation to the King.
“My call did not convince,” Michel said. “It was not heard. I have decided to resign and go to the King immediately.”
In answer to calls for an early election, Michel refused, saying it would only lead to “stagnation for the whole of 2019”.
As MPs applauded, the prime minister buttoned his waistcoat, picked up his briefcase, shook the hands of a number of government ministers, and left.
Michel was subsequently asked by the King to be a caretaker prime minister, with reduced powers, while parliament seeks to construct a new alliance of parties that can take the reins of power. It is expected that the talks with parties will take several days but that a election will be held in the new year.
The N-VA, a Flemish nationalist party with hardline views on immigration, walked out of the government earlier this month over Michel’s signature to a UN migration pact providing for a common global approach to migrant flows.
The draft UN accord lays down 23 objectives to open up legal migration and better manage a global flow of 250 million people, 3% of the world population.
The US dropped out of talks on the pact last year and countries including Italy, Hungary, Austria, Poland, Bulgaria, Slovakia and Australia have rejected it. The deal is expected to be ratified at the UN headquarters in New York on 19 December.