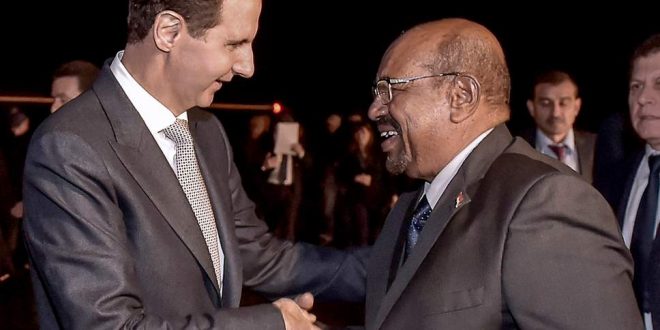 Sudan’s president Omar al-Bashir made a surprise trip to Syria on Sunday, becoming the first Arab League leader to visit the country since war began there in 2011.
The president met Syrian counterpart Bashar al-Assad, whose bloody crackdown on protests nearly eight years ago led to Syria’s suspension from the 22-member organisation.
The visit by accused war criminal Al-Bashir comes amid growing calls from Arab states to normalise ties with Syria, after years of condemnation, as many see the war nearing its end.
Last week, the Arab League parliament called on the organisation to reinstate Syrian membership, according to Egypt’s state run news agency. And, in October, Jordan reopened a major border crossing between the nations, boosting trade.
Outside of the Arab League, too, there are signs of a detente. Turkish foreign minister Mevlut Cavusoglu said on Sunday Ankara would consider working with Assad again under certain circumstances.
“If it is a democratic election, and if it is a credible one, then everybody should consider [working with him],” he said. His words came just a year after Turkish president Recep Tayyip Erdogan labelled Assad a “terrorist”, and said peace was impossible while the Syrian president remained in power.
Pressure for a settlement with the Syrian government is a reflection of reality on the ground. Over the past few years, with the help of Russian and Iranian forces, Assad’s troops have gradually won back most of the country from opposition rebels.
Many Arab countries backed rebel groups fighting to oust Assad and isolated the Syrian leadership as it brutally crushed the uprising against it. Today, only the province of Idlib remains under the control of opposition forces, while a third of the country is held by the Kurdish-led Syrian Democratic Forces.
Last year the UN estimated it will cost at least $250bn to rebuild Syria, and western countries have tied assistance to a political solution. Some Arab states, including Jordan and Lebanon, have expressed an eagerness to step in.
Bashir and Assad reportedly discussed “situations and crises faced by many Arab countries”, according to the Syrian presidency. Both said there was a need for “new principles for inter-Arab relations based on the respect of the sovereignty of countries and non-interference in internal affairs”, a statement added.
Bashir is wanted by the International Criminal Court (ICC) for multiple counts of war crimes, crimes against humanity and genocide, stemming from a conflict that erupted in Darfur in 2003.
Assad has also been accused of war crimes. As early as 2013, just two years into the conflict, the UN’s human rights chief said a commission of inquiry into rights violations in Syria had “produced massive evidence … [of] very serious crimes, war crimes, crimes against humanity” and that “the evidence indicates responsibility at the highest level of government, including the head of state”.
Efforts to refer Assad to the ICC have been blocked at the security council by Russia and China.