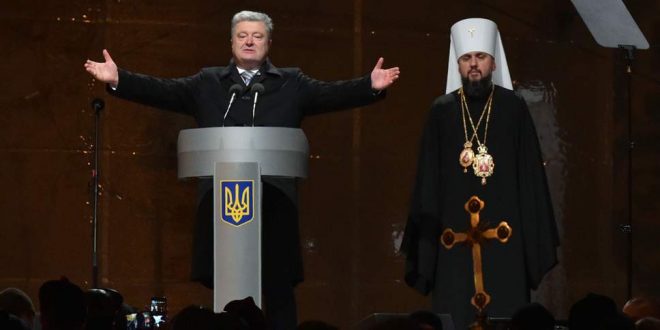 For proponents of Ukrainian independence, Saturday was a long-awaited day.
Inside Kiev’s St Sophia Cathedral, a unification council of 190 delegates gathered to serve the final rites on the country’s 332-year-old religious ties with Moscow Orthodoxy; to create a new, unified Ukrainian Orthodox Church; and elect a new leader. The council followed September’s decision by the Patriarch Bartholomew of Constantinople to grant the Ukrainian Church autocephaly (independence).
Several thousands of Ukrainians gathered outside the Cathedral from early Saturday morning. It was several hours before President Petro Poroshenko, the main architect of the process, emerged to break the news and present the new head of the Church, Metropolitan Epifaniy (Serhiy Dumenko).
“It’s here,” Mr Poroshenko said. “This day has already gone into history as a sacred day, the day we created an autocephalous local Orthodox Church. It is a day of final independence from Russia.”
The Unification Council brought together bishops from two hitherto-breakaway Ukrainian Orthodox churches, and 10 breakaway bishops from what was until recently the only canonical church in Ukraine, the Moscow-backed Ukrainian Orthodox Church.
It took the Council several hours of to elect Metropolitan Epifaniy as leader of the new unified church. The remarkably young 39-year-old is considered to be the right-hand man of the head of the Kiev-backed Patriarchate, Patriarch Filaret. The divisive Filaret chose not to stand, reportedly following interventions from Constantinople.
Both Moscow and the Moscow-backed Ukrainian Orthodox Church oppose the unification. Kiev, on the other hand, argues that the creation of a new, independent church is a matter of national security and independence.
President Poroshenko, who is struggling in the polls ahead of next March’s presidential election, has made it a centrepiece policy of his campaign.
But the push to create an autocephalous church in Ukraine is not a new one. Almost exactly 100 years ago, Pavlo Skoropadsky, hetman (the highest military officer) of the short-lived Ukrainian state in 1918, tried to do the same but was rebuffed by the Metropolitan of Kiev (an Orthodox bishop). Soon after, the Bolsheviks regained control, and the issue was closed for a century.
This time, things have moved in a different direction.
The first breakthrough for Kiev came in April, when Patriarch Bartholomew, the leading figure in the Orthodox Church, received Petro Poroshenko and his request for Autocephaly.
Several months later, in October, Bartholomew announced that Constantinople had agreed in principle to the request. Today represented the last stage before the issuing of “Tomos,” the official recognition of independence. This will now happen in early January.
The decision to grant the Ukrainian Church autocephaly has had a momentous impact in the Orthodox world. Following the October announcement, the Russian Orthodox Church resolved to sever links with Constantinople. While the Russian Church is the largest by numbers, Constantinople was notionally considered “first among equals” in the Orthodox world.
The split has also increased animosity between the three Orthodox operating churches. The Moscow-backed church has complained about pressure on congregations and clergy from the Kiev government.
In a recent interview with The Independent, Archbishop Kliment, a senior representative for the Moscow-backed church described the moves as “unprecedented, asset-grabbing schemes” that belonged in the Soviet period. He claimed the government would now look to arrest control of Kiev’s Pechersk Lavra monastery, the spiritual centrepiece of Orthodoxy.
Earlier this week, Patriarch Kirill, the head of the Russian Orthodox Church, complained about “large-scale persecutions” in an open letter to the UN, Pope and German leader Angela Merkel. A few days earlier, he talked about “forces of evil rising up against the Orthodox Church”.
The Ukrainian government accuses the Moscow-backed church of misleading public opinion. Kiev will not force adherence to the new church, it insists; every congregation will have the right to choose to which church it belongs.
Following four years of war in the east, support for the Moscow-backed church has fallen. Polls suggest that a majority of Orthodox believers now attend the Kiev Patriarchate. But the Moscow-backed church still has the most number of congregations (around 12,000 temples). A big question remains how many of those will now switch.
Once the Tomos is awarded in January, Moscow will likely do its best to isolate the new church.
The Russian Orthodox Church responded immediately to Saturday’s Unification Council by announcing that the new church was not canonical.
But for many people, the damage has already been done.
“The Russian Orthodox Church will now lose up to a half of its parishioners,” wrote Russian opposition leader Alexei Navalny on Twitter. “What was built over hundreds of years has been destroyed by Putin and his idiots over four years. Putin is an enemy of the Russian nation.”