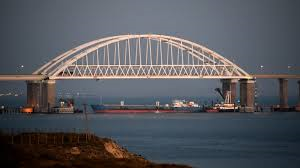 Turkey said on Monday it was worried by reports that Ukrainian ships had been fired on off the coast of Russia-annexed Crimea and said that shipping in the area should not be obstructed.
Russia seized three Ukrainian naval ships in the Black Sea on Sunday after opening fire on them and wounding several sailors, a move that risks igniting a dangerous new crisis between the two countries.
The incident took place near the Kerch Strait linking the Black Sea with the Sea of Azov.
“As a country sharing a Black Sea coast, we underline that passage through Kerch Strait should not be blocked,” Turkey’s foreign ministry said in a statement.
It also called for avoiding steps that could endanger stability and peace in the region.