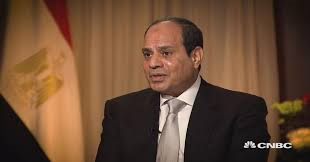 A petition demanding that Egypt’s president, Abdel Fatah al-Sisi, remain in power beyond his two-term limit is circulating within Egyptian institutions and among pro-state figures.
A photograph of the petition was provided to the Guardian by a senior political figure. The document states it is part of a campaign called The People Demand, and calls for a change to the constitution to allow Sisi to remain president beyond his second term.
Signatories give their name and personal details such as a national identification number to approve amending article 140 of the constitution, which stipulates that the president is elected for two presidential terms of four years. “We demand amending it to three terms,” it reads.
It is not clear how widely the petition has been circulated or how many have signed it. However, its existence follows a tried and tested model of giving the appearance of grassroots support to the Egyptian government’s policy goals. A similar petition called To Build It, demanding that Sisi ran for a second term, was started by an Egyptian member of parliament seven months before the March 2018 election.
Sisi, who came to power after a coup in 2013, won with 97.8% of the vote in March after five opposition candidates were barred from running. His only opponent was Moussa Mostafa Moussa, an avowed supporter.
The founders of To Build It declared after six months of campaigning that they had gathered more than 13m signatures of support for Sisi’s second term in office. When the Guardian visited the head offices of the campaign in January only a single staff member was present in an empty office next to a stack of unsigned petitions.
The campaign was marred by multiple reports of pressure, and intimidation for Egyptians to sign. One local television channel broadcast covert footage of working-class citizens being paid to sign the petition. A headteacher in Damietta was suspended after posting a sign instructing employees to sign the petition.
When contacted by the Guardian to ask if they were involved in the new campaign, personnel from To Build It either did not respond or said they were no longer involved in campaigning. Bassam Rady, the presidential spokesman, also did not respond when contacted about the petition.
The 2013 coup was preceded by the Tamarod (meaning “rebel” in Arabic) campaign, which called for the ousting of Sisi’s predecessor, Mohamed Morsi, and reportedly gathered 22m signatures.
The petition follows months of speculation that Sisi would seek an amendment to the constitution allowing longer terms and the removal of term limits.
A vote to amend the constitution would require Egypt’s parliament to call a referendum. In recent months members of parliament have debated merging existing parties into a singular pro-Sisi political party, with a “pro state” opposition party headed by Moussa.
Figures from Egypt’s beleaguered opposition were girding themselves to push back against efforts to amend the constitution even before Sisi was sworn in for a second term in June. “We expected this and began thinking about how we’ll face it,” former presidential candidate Hamdeen Sabahi told the Guardian in March. Anticipating Sisi’s victory, he said: “I’m sure we’ll see a very wide opposition movement against amending the constitution – but he’ll still do it.”