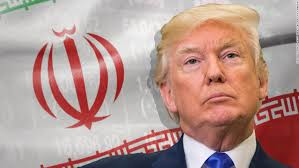 Trump says he’ll meet with Iran leaders with ‘no preconditions’

President Donald Trump has said that he would meet with the leaders of Iran without preconditions “whenever they want”.
“I would certainly meet with Iran if they wanted to meet,” Mr Trump said during an event at the White House. “I do believe that they will probably end up wanting to meet. I’m ready whenever they want to.”
Mr Trump, who has previously taken tough stances towards Iran and pulled the US out of the seven-party 2015 deal established to try and limit its nuclear weapons ambitions, continued: “No preconditions. They want to meet, I’ll meet. Whenever they want.”
Speaking on Monday, the president said he believed diplomacy was beneficial, and that he would “meet with anybody”. He continued to reinforce the belief that meeting with Russian President Vladimir Putin was a success, even though he has faced bipartisan criticism for the events of that meeting.
“Speaking to other people, especially when you’re talking about potentials of war and death and famine and a lot of other things — you meet. There’s nothing wrong with a meeting,” he said, while speaking at the White House during an appearance with Italian prime minister Giuseppe Conte.
That fresh approach came after Mr Trump exchanged harsh warnings and rhetoric with Iranian President Hassan Rouhani, and Mr Trump said that Iran could “suffer consequences the likes of which few throughout history have ever suffered before” if the country threatened the US.
The Iranian leader said that war between the two countries would be “the mother of all wars”.
Mr Trump took the dramatic step earlier this year to remove the United States from the Iranian nuclear agreement, saying then that he did not believe the Iranians were complying with the specifics of the deal and saying that staying in the agreement was out of the question because Iran had tested ballistic missiles — a subject that was not addressed in the original agreement.
In removing the US from that deal, Mr Trump was taking yet another step to destroy a signature accomplishment of his predecessor, President Barack Obama, who had focused on limiting Iran’s nuclear advances through diplomacy.
But, while America’s withdrawal from that deal signalled the potential for a collapse of the deal entirely, other countries have stepped up to support the deal and keep it together. Mr Trump said before withdrawing that he was open to renegotiating the deal so that it would more thoroughly inhibit Iran and its ability to develop deadly weapons.
If Mr Trump were to speak with the Iranian leadership, if you not be the first time he has met with figures that many in his party – and indeed, among Democrats, consider pariahs.
In addition to his summit in Helsinki with Mr Putin, Mr Trumped in June travelled to Singapore for an historic encounter with North Korean leader Kim Jong-un. It was the first time a sitting US president had met with a leader of the nation.