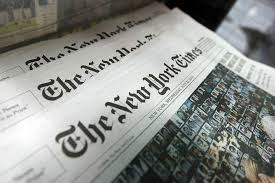 Hours after saying he had a “very good meeting” with the publisher of the New York Times about his labelling the press the “enemy of the people”, Donald Trump launched a blistering attack on “anti-Trump haters in the dying newspaper industry”.
“The failing New York Times and the Amazon Washington Post do nothing but write bad stories even on very positive achievements,” Trump tweeted. “And they will never change!”
Earlier, the White House confirmed Trump met Times’ publisher AG Sulzberger on 20 July. Sulzberger then issued a statement that opened an exchange over whose activities were more damaging to America.
Sulzberger said he had raised “concerns about the president’s deeply troubling anti-press rhetoric” and “implored him to reconsider his broader attacks on journalism, which I believe are dangerous and harmful to our country”.
Sulzberger did not say how the president responded. Hours later, Trump obliged.
In a multi-tweet rant, he claimed reports on “internal deliberations of our government … truly put the lives of many, not just journalists, at risk”. He added: “Freedom of the press also comes with a responsibility to report the news accurately.”
Claiming without evidence that “90% of media coverage of my administration is negative”, Trump said he would “not allow our great country to be sold out by anti-Trump haters in the dying newspaper industry”.
The president may have been referring to a study released last year by the conservative Media Research Center, which said 91% of mainstream coverage of Trump was negative. In a study of Trump’s first 100 days in office, the Shorenstein Center, at Harvard University, reached a similar conclusion.
On Saturday night, the executive editor of the Washington Post made public remarks that were implicitly critical of Trump.
In Annapolis, Maryland, Marty Baron spoke at a benefit event for the families of five people killed last month in a shooting at the Capital Gazette newspaper. They were “friends of the people”, he said. The event was also addressed by the New York Times’ Washington bureau chief, Elisabeth Bumiller, and Olivier Knox, the president of the White House Correspondents’ Association.
The suspect threatened the Capital Gazette after it reported his harassment of a high school acquaintance. A grand jury indicted him on 23 counts in the deaths of Gerald Fischman, Rob Hiaasen, John McNamara, Rebecca Ann Smith and Wendi Winters.
Baron did not mention Trump. Of the victims, he said: “Not one of them deserved to be seen as an enemy because of the profession they choose or the place they worked.
“Not one of them deserved to be seen as an enemy by the man who killed them, and not one of them deserved to be called an enemy by anyone else either. Nor does anyone else in our field deserve to be labeled that way.”
Baron added: “To demean people like these, to demonise, to dehumanise them, is to debase yourself.”
The day after the shooting, Trump said journalists should not fear being violently attacked while doing their job. He also said the shooting “shocked the conscience of our nation and filled our hearts with grief”.
But he has continued to attack the media. This week, Trump told veterans in Kansas City they should not “believe the crap you see from these people, the fake news” and added: “Just remember: what you’re seeing and what you’re reading is not what’s happening.”
Aides also barred Kaitlin Collins of CNN from an event at the White House, after she shouted questions in the Oval Office. That led to an industry-wide protest that included Fox News, Trump’s preferred network.
Knox, of Sirius XM, told the audience in Annapolis he divided “threats against journalists into two eras: before 17 February 2017 and after 17 February 2017. That’s because on 17 February 2017, the president of the United States, using his Twitter account, declared us enemies of the American people.”
That tweet named the New York Times, NBC News, ABC, CBS and CNN. The president’s use of the phrase has attracted criticism, including from within his own party. Trump has regularly attacked the Post over its ownership by Jeff Bezos, the Amazon billionaire.
His tactics appear to have benefits. On Sunday, a CBS News poll said 91% of strong Trump supporters trusted the president to give them accurate information. Only 11% said they trusted the mainstream media.
In his first tweet on the subject on Sunday, Trump wrote that he “had a very good and interesting meeting” with Sulzberger “about the vast amounts of Fake News being put out by the media & how that Fake News has morphed into phrase, ‘Enemy of the People’. Sad!”
Sulzberger, 37, took over from his father on 1 January. In his statement, he said: “I told the president directly that I thought that his language was not just divisive but increasingly dangerous. I told him that although the phrase ‘fake news’ is untrue and harmful, I am far more concerned about his labelling journalists ‘the enemy of the people’.”
He also “warned that this inflammatory language is contributing to a rise in threats against journalists and will lead to violence”, he said, and “repeatedly stressed that this is particularly true abroad, where the president’s rhetoric is being used by some regimes to justify sweeping crackdowns on journalists”.
The Times later reported a conversation with Sulzberger in which he discussed the off-record White House meeting further. Sulzberger said Trump expressed pride in popularising the term “fake news” and said countries had begun to ban it. Sulzberger said he pointed out such countries were dictatorships seeking to avoid scrutiny.
Sulzberger said Trump appeared to have listened to and said he would think on the issue.
In his original statement, Sulzberger said he “made clear that I was not asking for him to soften his attacks on the Times if he felt our coverage was unfair”.