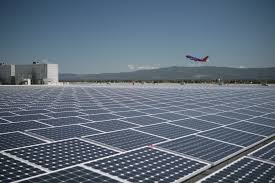 How is the world’s first solar powered airport faring

As an airplane hovers over Cochin International Airport, one is struck by the dazzling array of reflective panels near the runway.

Standing out in a field of green are more than 46,000 solar panels tapping the power of the bright sunlight and converting it into energy.

Located in the southern state of Kerala, Cochin is now the first airport in the world to run completely on solar power.

The airport started with a small pilot project by installing a solar energy plant with 400 panels on its rooftop in 2013. When that experiment succeeded, it decided to go all the way.

In August this year, the airport became totally self sufficient in meeting its energy needs after it installed a 12 megawatt solar plant close to the cargo terminal.

The airport’s managing director VJ Kurian says it was the huge power bills that prompted them to look at greener solutions.

Today, with its solar power plant it produces more energy than it needs and banks the rest with the state power grid for rainy days and night-time requirements.

The installation of the solar plant cost nearly $9.5m (£6.27m) and took around six months to complete. The company is hopeful of recouping the costs in less than six years. So far it has been a smooth journey for the airport, says Mr Kurian.

The challenge though is just around the corner.

The airport is looking to inaugurate a new international wing in January comprising nearly 1.5m sq ft which will require more energy than what the existing plant is generating.

Additional solar panels will have to be set up if the authorities wants to hang onto the “first fully solar powered airport” tag.

Cochin may have shown the way forward but the rest of India is not far behind in tapping the vast potential of the sun. As most parts of the country receive sunshine for over 300 days a year, the possibilities are plenty.

Recognising this, Prime Minister Narendra Modi has outlined his vision of increasing the country’s solar power capacity to 100,000 megawatts by 2022.

This is a dream that can be realised by having photovoltaic panels on the rooftop of every home in India, generating enough power to reduce the country’s massive fuel bill and dependence on fossil fuels.

Solar energy is also a much cleaner source of energy than conventional forms of energy like thermal and nuclear. Considering the global debate on climate change, developing economies like India with its ever increasing need for energy to fuel growth can turn to the sun to power ahead.

But it is not a simple process, despite the presence of abundant sunshine.

As Ashish Khanna, chief of Tata Power Solar points out, “We don’t have the [electricity] grid stability which can take the kind of power we are talking about. Also the quality of power is important.”

“We in India are very cost conscious and when we are talking about rooftop power, people may take decisions involving inexpensive pieces of equipment that may not contribute to the kind of quality we are talking about. The challenge right now is that there are no standards in place.”

Meanwhile, the solar plant at Cochin airport will produce 18 million units of power from the sun annually which is enough to meet the energy needs of 10,000 homes for one year.

The bonus is the environmental benefit of reducing carbon dioxide emissions by more than 300,000 metric tonnes which is equal to planting three million trees or not driving 750 million miles.

In a country where more than 300 million people still have no access to power, going solar may just be the solution that is needed to light up their lives.