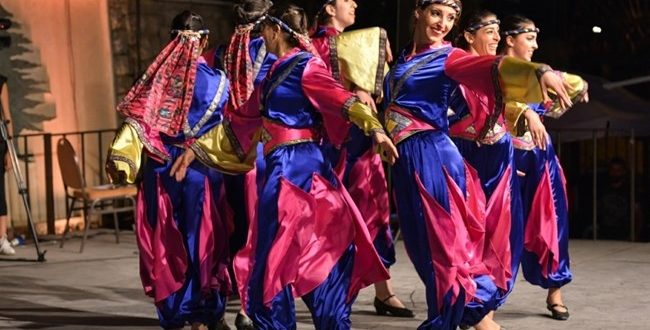 Jacqueline Martinez took her first steps on Lebanese soil in a dabke line. A Mexican of Lebanese descent, she doesn’t speak Arabic, and, like many of the country’s 8 million emigrants now scattered across the world after fleeing war, she never even imagined she would travel to Lebanon, the home of her grandparents. And yet, along with a hundred other professional dancers from Mexico, Canada, Brazil, and Argentina, she arrived in the country this weekend to do a most typically Lebanese thing: dance dabke.

The dancers, all of Lebanese descent, convened in Hayda Lebanon, a tourist resort in the mountainous village of Zaarour, for the first annual international dabke competition Saturday evening. They spent the days before the event discovering their estranged country: touring ancient sites, meeting Baalbek’s original dabke troupe, and visiting the various cities from which their families originate.

The event organizer, Fadi Abou Dagher, has devoted his life to finding innovative ways to celebrate Lebanese culture since he opened Hayda Lebanon nine summers ago. When he came up with the idea for an international dabke competition, he couldn’t believe it hadn’t happened before. “Dabke is basically a synonym for Lebanese heritage. This is the perfect way to bring our culture together and keep our tradition alive,” he said.

The tourism and foreign affairs ministers also attended to show their support. “Immigrants and emigrants are the roots of Lebanon. This is what our country needs. We have to preserve this,” Tourism Minister Avedis Guidanian told The Daily Star.

Cedra Hayek, the vice president of the Lebanese Emigrants Committee, emphasized the significance of the event for the diaspora. “Since the 19th century, Lebanese people have been forced to flee their homes. But they have left their hearts here. Now, it’s time for them to return.” She added she thought it was strange that Lebanon itself lacked any competitive or professional dabke dancers – further revealing the present-day purpose of the ancient dance: connecting with the homeland from afar.

The competition drew a massive crowd of Lebanese expats, now living everywhere from Vienna to San Diego. They rose to their feet as the Lebanese Army band opened the ceremonies with “Lubnan Rah Yerjaa” (“Lebanon Will Return”) – what Lebanese audience member Marysa Seaiby, a resident of Los Angeles born in Argentina, nonetheless considers “a call to home.”

Soon, the stage reverberated with the sound of punctuated stomps, claps, and whoops, as the teams, donning extravagant costumes, took turns dancing with gusto to the music of Fairouz and Nassif.

Flags of Argentina, Mexico, Canada, Brazil and Lebanon swept across the cheering crowd.

After two rounds for each team, the competition concluded with a more subdued and traditional performance from the dancers of Deir al-Ahmar in Baalbeck.

The anxiety of the competitors was palpable as the jury convened. “I’ve been practicing for ten years without any sort of competition to work toward,” Patricia Saad from Brazil’s team told The Daily Star as she hovered offstage. “My parents would die [from happiness] if I won.”

The jury mulled over a variety of components before deciding on the winner. “I’m judging on costumes, energy, synchronicity, music choice and choreography skills,” jury member and local maestro Gaby Farah said. “But most importantly, [I look for] the dancers’ adherence to the authentic nature of dabke.”

As drums rumbled, Abou Dagher announced the results: Argentina and Brazil tied for the first-place prize of $5,000; Canada won second place for $2,000 and Mexico third for $1,000. “We can’t wait to give everyone back home the news. They’ll be shocked,” Saad said. Her win cemented her commitment to dabke. “I know that I want to keep doing this my whole life. The dance moves me. The beat makes me want to fly. It’s something really deep,” she said.

For others, the actual results meant nothing compared to the competition’s larger meaning. “It’s not about winning or losing. The way we hold hands, stay in sync, follow each other’s rhythms – the dance is all about solidarity,” Martinez told The Daily Star as she prepared to rush off to the airport. “I still can’t believe I’m here. I was most surprised at how similar Lebanon feels to Mexico – the streets, the beach, the kindness of the people. We came from so far but it somehow feels like home.”