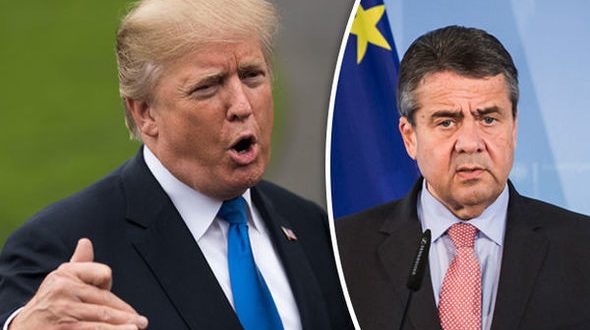 THE German Foreign Minister Sigmar Gabriel voiced his concern about a potential war with Iran if President Donald Trump decides to withdraw the UK from the Iran nuclear deal.

The US President accused Iran of sponsoring terrorism and proposed new sanctions.

His decision to decertify the agreement attracted condemnation across the European Union over the weekend.

Today, German Foreign Minister Sigmar Gabriel said: “As Europeans together, we are very worried that the decision of the US president could lead us back into military confrontation with Iran.”

After a closed-door meeting chaired by EU foreign policy chief Federica Mogherini on the Iran issue, the ministers issued a joint statement saying the 2015 deal was key to preventing the global spread of nuclear weapons.

The statement said: “The EU is committed to the continued full and effective implementation of all parts of the Joint Comprehensive Plan of Action.”

French Foreign Minister Jean-Yves Le Drian said: “Non-proliferation is a major element of world security and rupturing that would be extremely damaging.

“We hope that Congress does not put this accord in jeopardy.”

Mr Mogherini said she would travel to Washington early next month to try to garner support for the agreement.

The International Atomic Energy Agency (IAEA) says Iran is complying with its commitments under the accord, which sees Tehran stop its nuclear weapons development in exchange for the lifting of international trade sanctions.

Mr Trump branded the agreement “the worst deal ever negotiated”.

The EU still has sanctions in place against members of Iran’s Islamic Revolutionary Guard Corps, a major target of Trump’s criticism.

Mr Mogherini said the ministers did not discuss new sanctions on Iran over that programme.

While several EU governments, including the Netherlands and Britain, said Iran’s ballistic missiles and Tehran’s interventions in Syria and Yemen were a concern, ministers said the immediate focus had to be saving the 2015 deal.

Congress now has 60 days to decide wether it should withdraw out of the nuclear deal by reimposing sanctions.

The French President Emmanuel Macron claimed he stopped Mr Trump pulling out of the deal completely, fearing it could lead to a replica of the situation with North Korea.