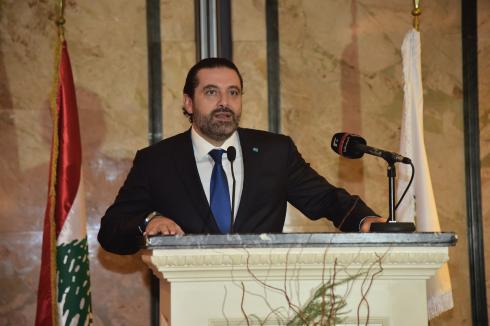 You are the movement that always stood by Martyr Premier and by me, especially in the last elections. I thank you from all my heart for the work you are doing, and I tell you that we have to work more and be modest. We have to deal humbly with others, be patient and work. If you encounter a wall, this doesn’t mean it’s the end of the road. You can go around the wall, find another way and try to open a door in it to continue just as Martyr Premier Rafic Hariri used to do.

From where did Rafic Hariri begin? Yesterday I invited children from orphanages to my house. Rafic Hariri was born in a simple family and you saw where he arrived. Each and every one of you can work hard, but we should work together and be one team. We have to end the scourge that everyone wants to be a leader. There is no leadership. It is not a about a leader, but a country. In one hundred years, they will remember Rafic Hariri who accomplished so much for Lebanon. They will talk about the person, how he was, how he became and what he did, and how he inspired all these youth. But inspiration is not to work each by himself. Rafic Hariri didn’t work alone. Many of his friends are here today. He was not a person who worked alone, but within a team. Every person with him would receive recognition for his work. Thus, all I ask is that you do not look at things from a personal point of view. It is about Lebanon and how we will rebuild it.