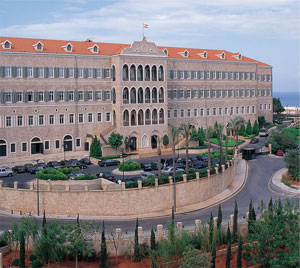 Lebanon is a parliamentary democratic republic based on respect for public liberties, especially the freedom of opinion and belief and respect for social justice and equality of rights and duties among all citizens without discrimination. The constitution guarantees the freedom of expression, orally or writing, freedom of assembly, and freedom to form associations.

The State is headed by the President of the Republic who is elected by the parliament every six years for a single term. The President is the symbol of nation’s unity and the commander in chief of the armed forces. He shall safeguard the constitution and Lebanon’s independence, unity and territorial integrity.

The political system is established on the principle of separation, balance and cooperation amongst the various branches of government. The constitution divides the powers of the state among three branches of government – legislative branch, the executive branch and the judicial branch. The legislative power is vested in the parliament and consists of 128 deputies elected by direct popular suffrage for a renewable four-year term with equal representation between Christians and Moslems. The Chamber elects one of its members as President of the Chamber for a similar term.   The executive power is entrusted to the Council of Ministers. The Council draws and implements public policy in accordance with the laws in force. The Prime Minister is appointed by the President of Republic following binding parliamentary consultations. The President of the Republic shall then issue in agreement with the Prime Minister the decree appointing the Cabinet. The President presides over the Council of Ministers when he so wishes, without participating in a vote, and he may convene it to emergency meetings.

The Lebanese Constitution guarantees that the judiciary is founded as an independent entity, subject only to the law. The judicial court system is composed of three levels: Courts of first Instance, Courts of Appeals, and Cassation court. The Constitutional court reviews the constitutionality of laws and arbitrates conflicts that arise from parliamentary and presidential elections. There also exists religious court system dealing with personal status for every sect in issues pertaining to divorce, marriage, guardianship, custody and inheritance.

Geographical Location: Lebanon, with Beirut as its capital, covers a total surface area 0f 10,452 square kilometers. It is located on the eastern coast of the Mediterranean Sea between latitude 33 and 35 N and longitude 35 and 36 E.  It is bordered on the north and east by Syria and on the south by the Palestinian Occupied territories. The country is roughly rectangular in shape becoming narrower towards the south and the farthest north. Its widest point is 88 kilometers and its narrowest is 32 kilometers. The physical geography of Lebanon is influenced by natural systems that extend outside the country. Thus, the Bekaa valley is part of the Great Rift system which stretches from Southern Turkey to Mozambique in Africa.  A major feature of Lebanese topography is the alternation of low lanes and high land running in a parallel manner with a north-to-south orientation. There are four longitudinal strips between the Mediterranean Sea and Syria. Which are from west to east as follows: –          A flat and narrow coastal strip (maritime plain) parallel to the Mediterranean Sea –          The Mount-Lebanon chain –          The Bekaa Valley (Central plateau) –          The Anti-Lebanon Mountains Chain Lebanon is located at the meeting point of the World’s three old continents: Africa, Asia and Europe, and over the centuries, it has been the crossroads of many civilizations whose traces may still be seen today. Lebanon enjoys a moderate Mediterranean climate with mild rainy winters and long warm and humid summers; and a topography that ranges from stunning scenic coastlines offering a variety of water sports to mountain slopes ideal for skiing, hiking and paragliding. The historical and archaeological sites, pleasant climate and natural beauty made Lebanon a country widely regarded as a “piece of Heaven on Earth”.  Area and Boundaries total: 10, 452 km 2 land: 10, 230km 2 water: 170 km2

Lebanese Flag: The Lebanese flag is formed of three horizontal stripes: a white stripe between two red ones. The width of the white stripe should be equal to two times a red one (ratio 1:2:1). The green cedar in the middle touches each of the red stripes and its width is one third the width of flag. The red color signifies the Lebanese martyrs’ blood in the struggle for independence. The white color represents Lebanon’s snowcapped mountain peaks; symbol of purity and peace. The cedar drawn from the Lebanese mountains is a symbol of holiness, immortality, steadiness and eternity. 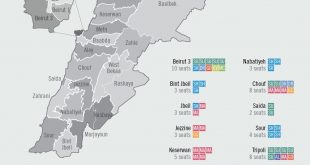