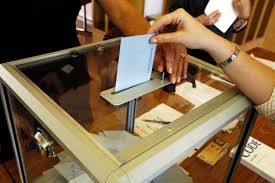 Catalonia to hold independence vote despite anger in Madrid

The Spanish government has accused the Catalan parliament of committing a “constitutional and democratic atrocity” by approving legislation to allow next month’s bitterly disputed independence referendum to go ahead.

On Wednesday night, the region’s ruling, pro-sovereignty coalition – which has a majority in the Catalan parliament – managed to get the referendum law passed despite angry objections from opposition MPs, who complained that usual parliamentary procedures had been disregarded.

The legislation passed by 72 votes after 52 opposition MPs walked out of the chamber in Barcelona in protest at the end of an ill-tempered, 11-hour session.

The move was denounced by the Spanish government, which once again said it would do everything in its legal and political power to stop the vote from going ahead on 1 October.

The Spanish prime minister, Mariano Rajoy, ordered government lawyers to file a complaint with the country’s constitutional court so that the vote could be annulled.

The public prosecutor’s office also said it was preparing a case against Catalan parliamentary officials – including the speaker, Carme Forcadell – for disobeying previous court orders forbidding legislative steps towards independence.

Catalan separatists insist the wealthy north-eastern region has a political, economic and cultural right to self-determination.

But Madrid is opposed to independence, arguing that it is a violation of the constitution, and has refused to offer a Scottish-style referendum on the matter.

Spain’s deputy prime minister, Soraya Sáenz de Santamaría, described the day’s events in the Catalan parliament as a “shameful and embarrassing” betrayal of democracy and the Spanish constitution.

She said that Forcadell and others had disdained the law and their fellow Catalans by pushing through the bill, adding that the speaker “doesn’t know what a democracy is or is not”.

Sáenz de Santamaría went on: “The government will defend freedom, democracy and coexistence. We won’t allow the law to go unheeded in Spain. Let no one doubt that we know what we have to do and that we will do it.”

A spokesman for the opposition centrist Ciudadanos party accused Forcadell and others of turning parliament into “the Catalan national theatre”, while the party’s national leader, Albert Rivera, said the country was enduring “a coup against democracy”.

Later on Wednesday evening, Inés Arrimadas, the Ciudadanos leader in Catalonia, announced her intention to bring a vote of no confidence against the Catalan president, Carles Puigdemont, to force new regional elections.

Forcadell, a veteran campaigner for Catalan independence and member of the ruling Together for Yes coalition, is already facing criminal charges for disobeying Spain’s constitutional court in July last year by allowing a parliamentary debate on a roadmap to independence.

In a tweet on Wednesday, she called on the members of the court to step down, arguing that they were political appointees and as such represented “another extension of the state which has lost all legitimacy”.

Forcadell is one of several senior Catalan separatist politicians to have found themselves in court.

In March this year, the former Catalan president Artur Mas was banned from holding public office for two years after being found guilty of disobeying the Spanish constitutional court by holding a symbolic independence referendum in 2014. Also convicted and temporarily banned from office were the former Catalan vice-president Joana Ortega and former education minister Irene Rigau.

On Tuesday, Spain’s court of auditors ordered Mas and 10 other former Catalan officials to reimburse the state for the €5.1m (£4.7m) cost of the referendum by 25 September.

Three months ago, Puigdemont announced that the

referendum would be held on 1 october and that voters would be asked: “Do you want Catalonia to be an independent country in the form of a republic?”

More than 80% of participants opted for independence in the 2014 poll – although only 2.3 million of Catalonia’s 5.4 million eligible voters took part.

The Catalan government insists that the results of the October vote will be legally binding. If successful, the regional government will declare independence from Spain 48 hours after the result is in and set about building a sovereign state.

In a speech in Madrid last May, Puigdemont said his government had a “democratically inviolable” commitment to the referendum and accused Rajoy of failing to do anything “serious, sincere or real” to address the issue.

A majority of Catalans are in favour of a referendum to settle the question of independence, but polls suggest they are split on the issue of sovereignty.

According to a poll at the end of July, 49.4% of Catalans are against independence while 41.1% support it. However, a poll this week found that, were the referendum to go ahead, the yes campaign would take 72% of the vote on a turnout of 50%.

The Catalan government has not set a threshold for minimum turnout, arguing the vote will be binding regardless of the level of participation.