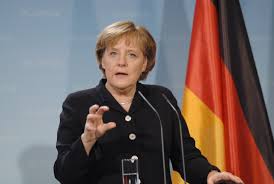 German chancellor Angela Merkel challenged internal party critics of her liberal refugee policy on Monday, warning that cowards and pessimists had no place in her Christian Democratic Union (CDU).

In a barnstorming party conference speech, which received a 10-minute standing ovation, the CDU leader conceded the refugee crisis posed a “historic challenge” to European and German values.

“But it belongs to the identity of our country to master the greatest [challenges],” she said, recalling how Germany had rebuilt itself from wartime rubble to a postwar “economic miracle”, and later brought prosperity to a unified East and West.

Facing down doubters and critics in her party, she dubbed as a “humanitarian imperative” her decision in August to allow Syrian refugees stranded in Hungary into Germany. The CDU leader then nailed her political future to succeeding in the refugee crisis, likening her “we can manage this” refugee crisis mantra to Helmut Kohl’s promise in 1990 of “blossoming landscapes” for eastern Germany and Ludwig Erhard’s 1950s vow of “prosperity for all”.

As Germany received its millionth refugee last week, a huge logistical challenge in a country of 80 million, Dr Merkel has faced demands for a migration cap, something she sees as a contradiction to fundamental human rights.

To defuse conflict, she backed a compromise for a “noticeable reduction” in numbers coming to Germany. Key to this were European measures, she said: common asylum rules, better border controls and “hotspots” in Italy and Greece to register and redistribute arrivals at EU outer borders.

Given the historic challenge, Dr Merkel said she was aware of her obligation to hold the continent together in the search for common solutions, even if the “European wheels turn slowly”. “Europe has always passed the test, sometimes scraping through in the last minute, but I am sure this will happen this time and we will make our contribution,” she said.

Urging her party to believe in itself, she cited Germany’s transformation in the last decade – from sick man to European powerhouse – as proof of what was possible when people embraced change to cope with a huge challenge.

“If our courage had failed us, Germany would have been a different country today,” she said. And now, as then, she said, Germany was “always confident and careful” with a and “readiness for risk and never naive”.

“We never let fear and pessimism hinder effective action for the future,” she said. To successfully integrate refugees, it was essential to explain to them Germany’s “strong native identity” of non-negotiable values, she said, such as religious freedom and equality of gender and sexuality.

Despite rising support for far-right populists across Europe, Dr Merkel said “cutting ourselves off” from the globalised world was “not a sensible option”. Involving people in the process of change, she argued, was the best way to prevent people in Europe taking the bait of those with “hate in their hearts who agitate against foreigners”.

With the vote of confidence, Dr Merkel has bought a few months’ time at home, on a crisis that remains as vast as Europe is divided. Wolfgang Schäuble, a hardliner in the refugee debate, warned delegates and Dr Merkel: “Wanting to do good is not enough. Whoever carries political responsibility needs to make sure freedom and good nature . . . is not destroyed by being overtaxed.”