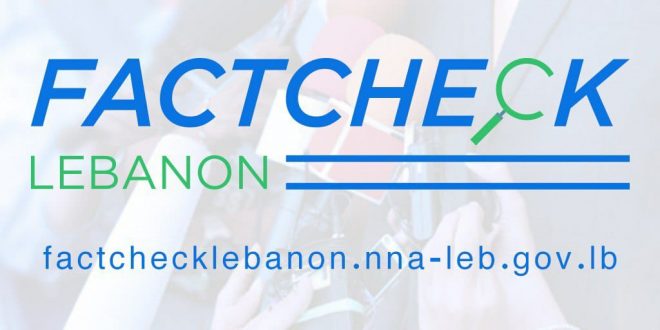 Minister of Information, Manal Abdel Samad, on Wednesday launched the “Fact Check Lebanon” webpage, during the “Curbing Fake News Forum” held at the Grand Serail, in the presence of representatives of embassies and UN bodies in Lebanon, UNHC Head of Communications, Melissa Fleming, and a panel of Lebanese politicians and delegates from Twitter and Facebook.

In her word, Abdel Samad highlighted the obligation to debunk fake and misleading news, which only stir tension and harm the society and its members.

“Misinformation campaigns and rumors against the government are reprehensible, not to mention aim to make its rescue mission more difficult to achieve,” Abdel Samad said in regret.

“Their aim is to bog people down in desperation — those very same invincible people who love life. They aim to kill people’s sense of initiation and their will to develop the country. However, we believe that the more the rumors, the more we believe that we are on the right path,” the Minister added.

Abdel Samad went on to highlight the paramount importance of “self-censorship” and “fighting misinformation and fake news”.

“There is no doubt that modern technology makes social media messaging platforms a fertile environment and ground to promote all kinds of news. Manipulating the content of any piece of information, image, video, or audio recording has become a very easy matter,” the Minister warned, reiterating the importance of self-censorship.

“In the digital age, each of us has become responsible for every word he/she says, and also responsible for the publication of any piece of news, picture, or video,” she added.

Abdel Samad then explained that the forum aimed to fight misinformation campaigns.

“This matter is of extreme importance and occupies the media milieu in Lebanon and the world. We may not be able to halt misinformation campaigns, but we can mitigate their effect. On such basis, the Ministry of Information has created Lebanon’s ‘Fact Check’ website, which could be accessed through the National News Agency’s website, to verify false news. This page will be accessible to everyone to verify the accuracy of doubtful and suspicious news,” explained Abdel Samad.

She finally called on the media not to give up on their message by fully adhering to their mission to spread the truth. “We depend on you to help in the country’s rescue mission and to achieve the country’s best interest.”