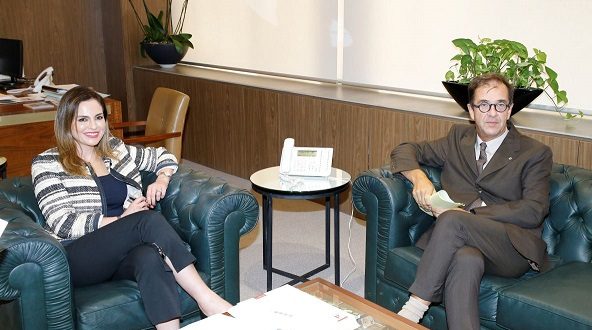 Minister of Information, Dr. Manal Abdel Samad Najd, on Monday welcomed French Ambassador to Lebanon, Bruno Faucher, in her office at the Ministry, with talks reportedly touching on the Lebanese-French relations at the media level.

Minister Abdel Samad said she was glad to welcome Ambassador Faucher at the Ministry of Information on the eve of July 14, saying: “This occasion is important not only for France, but also for Lebanon, which shares its values.”

She continued to say: “On this occasion, we confirm our adherence to Lebanese-French relations and the spread of la Francophonie and its values via public media outlets. We also confirm our commitment to the partnership between the Ministry of Information and the France Médias Monde group through the French Embassy.”

Minister Abdel Samad pointed out that the Ministry plans to enhance the work of the French sections of Radio Lebanon, the National News Agency, the Directorate of Studies and Publications, and the state-run Television of Lebanon (TL), in order to contribute to the spread of culture through the cultural diversity promoted by these outlets.”

Abdel Samad also noted that she has invited ambassador Faucher to participate in the “Curbing Fake News” Forum organized by the Information Ministry next Wednesday, July 15, at the Grand Serail.

The Minister also called on all the Lebanese, despite the dire socio-economic conditions, to participate in this forum via the social media platforms affiliated to the Ministry and Tele Liban.

“The forum will seek to devise a strategy to combat this scourge, which has bad repercussions on society,” the Minister maintained.

Ambassador Faucher, in turn, thanked Minister Abdel Samad for her role in promoting francophonie, and activating bilateral relations and cooperation between the French Embassy and the Ministry of Information, especially Radio Lebanon’s foreign language section.

Faucher affirmed continual cooperation between the French Embassy and the Ministry.

Afterwards, Abdel Samad and Faucher toured the various sectors of Radio Lebanon, the French section and the archive.

Ambassador Faucher was hosted on “Liber Cours” radio program, presented by Nanette Ziadeh, with the participation of Hayyan Mroueh.