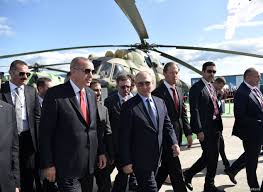 Russia has deployed military helicopters to patrol an area near Syria’s border with Turkey in order to help protect Russia military police working on the ground, the Interfax news agency said on Friday.

Turkish and Russian forces are holding joint patrols in northeastern Syria to monitor an agreement struck by Moscow and Ankara after Turkey launched an offensive across its border with Syrian rebels a month ago, seeking to push out Kurdish YPG fighters it sees as a threat to its security.

Interfax cited Russian military pilot Dmitry Ivanov as saying that Moscow would deploy its helicopters along several patrol routes at a height of 50-60 meters.

“Flights will be carried out daily along all the patrol routes,” he was quoted as saying.