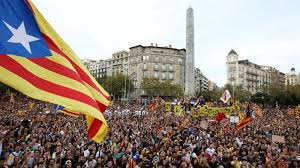 Spain’s government has rejected calls for negotiations from Catalonia’s president on the grounds that he had not sufficiently condemned the violence of protests that have gripped Barcelona for six straight days.

Despite the city’s mayor pleading for restraint and the efforts of dozens of middle-aged protesters to form a human barrier between younger protesters and riot police to prevent another street battle, violence eventually erupted again late on Saturday night.

However, there was not a repear of the previous nights clashes, which saw masked youths blocking roads with blazing litter bins and hurling petrol bombs, chunks of pavement, firecrackers and acid at police after surrounding their headquarters.
This led Catalonia’s president Quim Torra to ask again for discussions with Madrid to find a “democratic solution” to the crisis.
He insisted the unprecedented unrest did not reflect the peaceful nature of the Catalan independence movement, backed by roughly half of the region’s 5.5 million voters.

But Spanish prime minister Pedro Sanchez rebuffed his request, saying: “Mr Torra must strongly condemn the violence, which he has not done so far. The government of Spain reiterates that the problem of Catalonia is not independence, which will not occur because it is not legal and nor does the majority of Catalans want it, but rather coexistence.”

The protests have raged since Monday after the Spanish Supreme Court handed lengthy jail terms to nine pro-independence leaders for their role in 2017’s failed independence bid, including the staging of an unlawful referendum.

Elected as president in 2018, Mr Torra, a hardline independence supporter, has been criticised for initially encouraging civil disobedience and being slow to condemn the violence.

By late afternoon, skirmishes had broken out, with police using rubber bullets, tear gas and water cannons to dispel protesters.

Health authorities said 41 people were injured in Barcelona on Friday alone, with watchdog Mèdia.cat reporting that 20 journalists were hurt, most easily identifiable as members of the press.

While roughly 200 police officers have reportedly been injured since protests began, they have been heavily criticised for using excessive force.

Amnesty International said it observed instances where officers had used batons and other weapons against those who posed no risk and that hundreds had been injured by anti-riot equipment.

On Sunday morning, lbert Rivera, and one of the most prominent anti-independence figures, told hundreds of flag-waving supporters that Spain’s acting Socialist government was not doing enough to end the chaos.

“People can’t take their children to school, they can’t open their businesses,” said Barcelona-born Mr Rivera, head of the pro-unionist Ciudadanos party. “We need a Spanish government that protects the weak.”